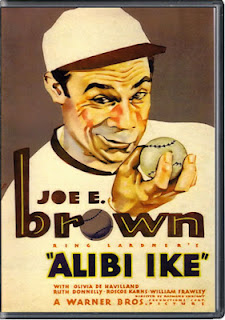 ~Joe E. Brown 1891–1973 (Cubs fan/movie star)
His name isn’t remembered by many people today, but Joe E. Brown was an actor, comedian, and baseball nut. He was also one of the biggest movie stars in America during the 1930s. He made his mark in a series of baseball movies, and in his two biggest box office hits (“Elmer, the Great” and “Alibi Ike”) he portrayed fictional players on the Chicago Cubs. Both of those films were written by the great baseball writer Ring Lardner, and filmed in LA’s Wrigley Field. Brown called the character of Elmer his all-time favorite: a lovable, walking, talking, egocentric braggart. Elmer also does something in the movie that we can only dream of witnessing…he hits a grand slam to win the World Series for the Cubs. Several real-life Cubs were in that movie too: Babe Herman, Larry French, Tuck Stainback, and the man who allegedly served up the pitch for Babe Ruth’s called shot: Charlie Root. In his next baseball movie, “Alibi Ike,” Brown played another Chicago Cubs player, pitcher Francis X. Farrell. They called him Alibi Ike because he had an excuse for everything. One of his famous lines: “I coulda won more than 30 games last year, but I had malaria half the season.” Brown’s Ike is a clowning excuse maker that forgets what made him who he is as he pursues his rookie season with the Chicago Cubs. But, like all of Brown’s characters, Ike has a heart of gold, and eventually gets back together again with his estranged girlfriend (Olivia de Havilland). Ike realizes that she is more important to him than wearing a Cubs uniform, and it’s not until he realizes it that he fulfills his baseball potential.

~Carmello Martinez 1960– (Cubs 1983)
Martinez showed plenty of promise during his rookie season of 1983. In only 96 plate appearances, he clubbed six homers and knocked in 16 runs. It appeared he would be a corner outfielder in Chicago for years to come. Instead, he was the centerpiece in the trade that helped the Cubs acquire starting pitcher Scott Sanderson. Martinez had a pretty good career in San Diego, hitting over a hundred career homers, but he didn’t turn out to be the stud Cubs fans feared they were trading away. On the other hand, Martinez was able to do one thing with San Diego that he never would have been able to do with the Cubs. He played in the 1984 World Series.