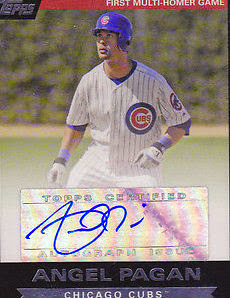 ~Angel Pagan 1981– (Cubs 2006-2007)
Pagan came up to the big leagues with the Cubs and served as their fourth outfielder during his two years in Chicago. He got sick in his second season in Chicago, and lost a lot of weight. Cubs GM Jim Hendry didn’t think he would be able to contribute much, so he traded him before the 2008 season began. Bad move by the Cubs. They traded him to the Mets for two minor leaguers who never made it to the big club. Meanwhile, Pagan turned out to be a very solid big league outfielder. He has a lifetime batting average over .280, has stolen over 150 bases, and was a key contributor to the 2012 and 2014 World Series champion Giants. (Photo: Topps 2007 Baseball Card)

~Jermaine Van Buren 1980– (Cubs 2005)
Jermaine was a right-handed reliever who pitched 11 seasons in the minors, but he did get a brief cup of coffee with the Cubs in 2005. He pitched in six games, but had trouble harnessing his command. The Cubs sold him to the Red Sox after the season, and he had one more (even less successful) chance with Boston the following year. In 19 big league innings, he walked 25 batters.

~So Taguchi 1969– (Cubs 2009)
Taguchi was a ten-year veteran of the Japanese League when he came to America to play for the Cardinals in 2002. He never claimed a starting outfield position with the club, but he was a key contributor to two World Series teams in St. Louis. His time in Chicago was not nearly as glorious. He played six games for the Cubs, and decided to return to Japan to finish out his career in his homeland.

~Len Madden 1890–1949 (Cubs 1912)
Madden was a left-handed pitcher, so naturally his teammates called him Lefty. The Cubs were the only team he pitched for in the big leagues, and it wasn’t exactly a lengthy stay. He pitched in six games and was hit pretty hard. He gave up 16 hits and walked nine men in only twelve innings of work. If you ever want to travel back in time to watch him, set the wayback machine to August 31, 1912. You’ll only need to stay in the past until September 19th, and you can witness his entire big league career.