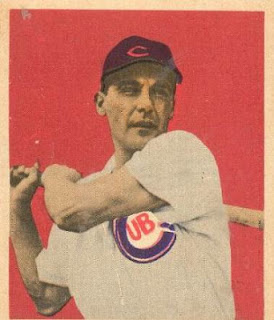 ~Phil Cavarretta 1916–2010 (Cubs 1934-1954)
Philabuck, as he was known, had a tremendous career for the Chicago Cubs. The local Chicago boy (Lane Tech High School) wore a Cubs uniform for twenty seasons, including the last few when he was a player/manager. Phil was Mr. Cub before Ernie Banks. He was the heart and soul of the pennant-winning Cubs team in 1945, a year he won a batting title and the MVP, and hit over .400 in the World Series. That was his 3rd World Series for the Cubs — he had been an integral member of the 1935 and 1938 teams as well. Unfortunately, his great Cubs career didn’t end well. He was the Cubs manager in the spring of 1954, when he was called into Phillip Wrigley’s office. The boss asked him what he thought of that year’s prospects. Speaking honestly, Phil told him he only liked a few players on the team, including rookie shortstop Ernie Banks, and said he was still upset about the trades which had depleted his roster (like trading Andy Pafko and Johnny Schmitz to the Dodgers for four stiffs). Wrigley responded by firing him…during spring training. He and the Cubs never made amends. Cavarretta passed away in 2010 at the age of 94.

~Mark Koenig 1904–1993 (Cubs 1932)
The ex-Yankee Mark Koenig replaced Cubs shortstop Billy Jurges after Jurges was shot by a fan. Despite hitting .353 during the season and saving the hides of the Cubs, the players voted not to give him a full World Series share. This really angered the Yankees, especially their emotional leader Babe Ruth. It was one of the reasons he wanted to beat the Cubs so badly in that 1932 World Series…and he did. Koenig played one more year for the Cubs in 1933, before finishing his career with the Reds and Giants.

~Marcelino Solis 1930–2001 (Cubs 1958)
The Mexican-born left-hander was nearly 28 years old when he made his big league debut in 1958. He pitched the second half of the season for the Cubs that year, and registered an ERA of over six in fifteen appearances. He stayed in the farm system for a few seasons before returning to Mexico to finish his career in his homeland.

~Bob Pettit 1861–1910 (White Stockings 1887-1888)
Not to be confused with the NBA Hall of Famer, this Bob Pettit was a utility man for the Cubs (then known as the White Stockings). He played in the infield (second and third base) as well as the outfield in a backup role. His lifetime batting average was .240.

~Phil Coke 1982– (Cubs 2015)
The Cubs picked up the left-handed reliever late in spring training in 2015 as a free agent. Coke had previously pitched for the Yankees and the Tigers and had appeared in a World Series for each team. His 2009 Yankees won the championship, and his 2012 Tigers lost to the Giants. His Cubs career lasted almost exactly one month. He was designated for assignment in May.