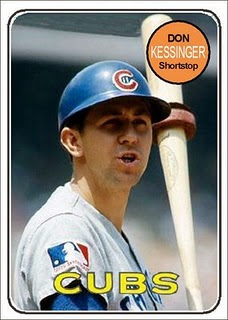 ~Don Kessinger 1942– (Cubs 1964-1975)
Kessinger had a brilliant career with the Cubs, holding down the starting shortstop position for over a decade during the Cubs resurgence of the late 60s/early 70s. Kessinger was an All-Star five years in a row (68-72) and a two-time Gold Glover. He and Glenn Beckert formed the Cubs double play combination for nine seasons. Kessinger was known as a fine glove man, and though he was probably miscast as a leadoff man on a team that didn’t really have a better alternative, he was also a tough out. He scored a lot of runs with the likes of Banks, Williams, and Santo hitting behind him. He was up to bat when the infamous black cat crossed Ron Santo’s path in the on-deck circle in 1969. When Kessinger was traded away in 1975, he was the last player from that fondly recalled era. He later played for the Cardinals and White Sox, and even managed the Sox. (Photo: Topps 1969 Baseball Card)
AUDIO of Kessinger Inside the Park Homer:

~Herb Hutson 1949– (Cubs 1974)
Hutson was a right-handed pitcher for the Cubs for a few different stints during the 1974 season. He had been a lifetime starting pitcher that the Cubs tried to use out of the bullpen. He had limited success (3.45 ERA in 20 appearances) and went back to the minors for the 1975 season. After that year, he hung up his baseball spikes at the age of 26. 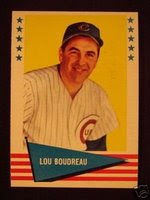 ~Lou Boudreau 1917–2001 (Cubs manager 1960, Cubs announcer 1958-1987)
Lou had a Hall of Fame playing career with the Cleveland Indians, winning the World Series as a player/manager in 1948 (the last time Cleveland won it), but he spent many more years in his hometown of Chicago, covering the Chicago Cubs. Lou’s only season wearing a Cubs uniform was 1960. He took over the managing job from Charlie Grimm and led the team to a 7th place finish, 29 games under .500. After the season he asked for his radio job back, and was replaced as manager by the ridiculous College of Coaches experiment. A whole generation of Cubs fans grew up listening to Lou on the radio. His interviews with Cubs manager Leo Durocher were the stuff of legend. Because of Durocher’s unique personality, the show (Durocher in the Dugout) was often entertaining. Lou passed away in 2001 at the age of 84. His nickname was Good Kid.
AUDIO: