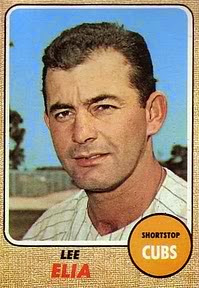 ~Lee Elia 1937– (Cubs player 1968, Cubs manager 1982-1983)
Elia was a big league shortstop who got a cup of coffee as a player with the Cubs in 1968. He got 3 hits in 17 at-bats. The following spring he was traded to the Yankees for Nate Oliver. Cubs fans don’t remember Lee for his playing days, however. They remember him for his stint as Cubs manager. Elia was the first manager brought in by Dallas Green after he was named general manager. That Cubs team didn’t have a ton of talent, and Elia got a bit frustrated by the impatience of the fans. It blew up on him on that infamous day in April of 1983. His expletive-filled rant, recorded by WLS-AM sports reporter Les Grobstein, is the stuff of legend. That memorable tirade is captured beautifully here within the cheerful Cubs jingle…
AUDIO:

~Dad Clark 1873–1956 (Orphans 1902)
Clark was a left-handed first baseman who got a cup of coffee with the 1902 Cubs (then known as the Orphans). He didn’t hit well (.186 in 48 plate appearances), so he returned to his native West Coast for the rest of his career. He played in the minor leagues out there for the next decade.