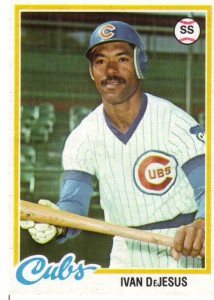 ~Ivan de Jesus 1953 (Cubs 1977-1981)
Ivan de Jesus was born in Puerto Rico. The Cubs made a rare good trade after the 1976 season when they sent Rick Monday to the Dodgers for Bill Buckner and a little known prospect named Ivan de Jesus. Ivan had a few very good years with the Cubs, especially in the field. In his first season in Chicago he made 595 assists, which is still the fifth best season in baseball history for a shortstop. He could hit a little too…at least in his first few seasons. He even scored more than a hundred runs during the 1978 season, which led the league that year. But his 1981 season is among the worst in history. He hit only .194 in over 400 at bats, and drove in only 13 runs. The Cubs traded him after the year. It was probably their best trade in history, because in return for their .194 hitting shortstop the Cubs got a future Hall of Famer (Ryne Sandberg) and a gritty veteran starting shortstop (Larry Bowa) to keep the position warm until their star minor leaguer Shawon Dunston was ready to play in the big leagues. (Photo: 1978 Topps Baseball Card)

~Joe Wallis 1952 (Cubs 1975-1979)
Joe Wallis earned the nickname “Tarzan” because he was fond of cliff diving. He played parts of four seasons with the Cubs, playing all three outfield positions, but predominantly a very shallow centerfield. Tarzan didn’t hit much for average (lifetime .244), or power (16 career homers), and he didn’t have a lot of speed (7 stolen bases in 5 big league seasons), but he did have one thing that many of his teammates desired for themselves…a great nickname.