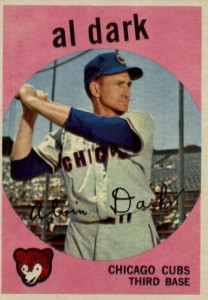 It all started when a missed strike three got away from Cubs catcher Sammy Taylor. Taylor, thinking it was a foul ball, didn’t go after the ball. The bat boy, also thinking it was a foul ball, picked it up and tossed it to field announcer Pat Pieper. Pieper saw that the batter was running to first base, so he realized it was a live ball, and let it drop at his feet. Third baseman Alvin Dark ran over to grab it. Meanwhile, the umpire gave Sammy Taylor a new ball out of habit. In the confusion, the runner on first base, Stan Musial, made a run for second base. Cubs pitcher Bob Anderson took the ball out of Sammy Taylor’s catcher’s mitt and fired it to second base at the same time that third baseman Alvin Dark threw his ball to second base. Ernie Banks was covering second and caught one of the balls heading his way, while the other ball escaped into centerfield.

Ernie tagged out Musial with one ball, while center fielder Bobby Thomson lobbed the other ball into the dugout. Thinking that “real” ball has been tossed into the dugout, Musial kept on running and scored. The umpires had a very long discussion about this play on the field before finally ruling that Musial was out because Ernie tagged him. The Cardinals were enraged by the call on the field and lodged an official protest. The protest wasn’t necessary. The Cardinals won the game anyway, 4-1.

~Dad Clarke 1865 (1888 White Stockings)
He was a pitcher who eventually pitched seven years in the big leagues, but his stay in Chicago lasted only two games at the age of 23.

~Kitty Bransfield 1875 (1911 Cubs)
Kitty Bransfield played for the Cubs in his last season in the big leagues. He was a great first baseman for the Pirates before coming to the Cubs, and they called him Kitty there. The reason for the nickname, according to the Baseball Biography Project: “His original nickname was “Kid,” but a reporter with bad hearing heard it as “Kitty” and the name stuck.”

~Dick Calmus 1944 (1967 Cubs)
Dick Calmus got into 21 games with the 1963 Dodgers but didn’t get back up to the big leagues until September 2, 1967. He was the starting pitcher for the Cubs that day in the second game of a double header against the Mets at Wrigley Field. The Cubs spotted him a 4-1 lead, but Calmus couldn’t hold it. He gave up two home runs to the Mets second baseman Jerry Bucheck, and was pulled in the fifth inning. It was his last big league appearance. He was 23 years old.

~Alfonso Soriano 1976 (2007-2013 Cubs)
When he signed an eight year contract with the Cubs, he was heralded as a huge signing. After all, he had a rare combination of power and speed (40 homers and 40 steals). Unfortunately, that speed left him pretty quickly after he joined the team, and it wasn’t long before he heard the boo birds. In fairness he did have several good seasons with the team, and by the end of his time here, the fans were almost sad to see him go. 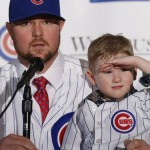 ~Jon Lester 1984– (Cubs 2015-present)
The three-time All-Star and two-time World Series champ became the highest paid pitcher in Cubs history before the 2015 season began. He was brought in to be one of the final pieces of the puzzle and help lead the Cubs to the promised land. The contract seemed outlandish at the time, but it has turned into an incredible investment for the Cubs. He led them to the playoffs four years in a row. What seemed like a pipe dream the day he signed the contract became reality. Lester posted a very respectable 3.34 ERA in his first Cubs season in 2015, but in 2016 he had a tremendous year — winning 19 games, finishing in second in the Cy Young voting, and serving as the ace of the Cubs during their World Series run. He was the MVP of the NLCS, won the crucial Game 5 of the World Series in Chicago, and even pitched a few innings in relief in Game 7. By comparison, his follow-up season in 2017 was mostly a disappointment. Lester had to be shut down for a while because of a dead arm, and finished the year with a 13-8 record and a 4.33 ERA. He was pulled in the 5th inning of Game 2 in the NLCS after walking five batters and throwing more than a hundred pitches. But in his fourth year with the Cubs, Lester bounced back to lead the club with 18 wins, post a sterling 3.32 ERA, and start the only playoff game. The Cubs lost that game, but not because of Lester. The game went 13 innings before the Rockies squeaked out a victory. It wasn’t until the 2019 season that Father Time appeared to catch up with Jon. The whole season was a grind. He did manage to win 13 games, but his 4.46 ERA told the true tale of his effectiveness.