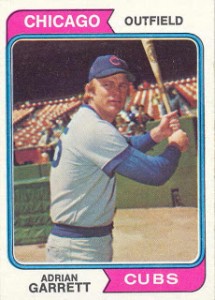 ~John Fluhre 1894 (Cubs 1915)
He played briefly for the Cubs in their last season at West Side Grounds, including one game under the pseudonym William G. Morris.

~Pete Turgeon 1897 (Shorstop, Cubs 1923)
He played for the Cubs at the very end of the 1923 season and managed to get into three games and get six at bats. Four of those at bats came in the final game of the season when he started at shortstop for the Cubs. He got a single and scored a run in 6-3 loss to the Cardinals. He was back in the minors the following year and never made it back up for another taste of the show.

~Chico Hernandez 1916 (Catcher, Cubs 1942-43)
His teammates called him “Chico” and in 1942 he and Cubs pitcher Hi Bithorn formed the very first all-Latin battery in big league history. Chico was from Cuba. Bithorn was from Puerto Rico.

~George Piktuzis 1932 (Pitcher, Cubs 1956)
He was a local Chicago boy from Morgan Park High School, but served in the military at the height of his baseball career, and only pitched in two games for the Cubs .

~Archie Reynolds 1946 (Pitcher, Cubs 1968-70)
Pitched in parts of three seasons for the Cubs, but didn’t get significant time in any of those seasons. Later pitched for Angels and Brewers.