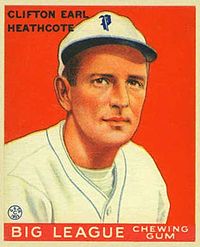 ~Cliff Heathcoate 1898 (Cubs 1922-1930)
He became a Cub in 1922 when he was traded to the team between games of a double header with the Cardinals. The Cardinals got Max Flack in return, and both players played for both teams that day. Cliff was an excellent defensive outfielder and played with the Cubs until 1930. On 8/25/22 he was part of the highest scoring game in baseball history. He reached base seven times during that 26-23 win. Cliff died tragically at the way too young age of 40 in 1939 from a pulmonary embolism. (Photo: 1933 Goudy Baseball Card)

~Jose Quintana 1989– (Cubs 2017-present)
The Cubs acquired Jose in a blockbuster crosstown deal with the White Sox just before the trading deadline in 2017. The Sox got two of the Cubs best prospects (Eloy Jimenez and Dylan Cease) in the deal. Quintana pitched very well down the stretch (7-3 record, 98 Ks in 84 innings) and pitched a gem in the 2017 NLDS versus the Nationals. He was also the tough-luck loser in Game 1 of the NLCS, leaving the game with the lead. Unfortunately, in his final start of the playoffs he was ROCKED by the Dodgers in the game that ended the Cubs championship run. It’s been very up and down for Jose since then. He won 13 games in both 2018 and 2019, and showed flashes of brilliance, but he also went through stretches where opposing teams pounded him. This is a trade Cubs brass probably wishes they never made.

~Jack Brickhouse 1916 (Cubs Announcer from the 1940s until 1981)
Jack was the man that had to describe the play of play of a Cubs team that went twenty seasons in a row without being in the upper division. There were bright spots, though, and Jack was always able to find them. He is a member of baseball’s Hall of Fame.

~Bunk Congalton 1875 (Cubs 1902)
He was 27 years old when he finally made the show in 1902 and the outfielder hit .239 in his one season in Chicago. He later had a few better seasons with Cleveland. He died in 1937 at the age of 62 after suffering a heart attack at a Cleveland Indians game.

~Tim Stoddard 1953 (Cubs 1984)
Tim Stoddard was born on this day in 1953. In college he played in a national championship game in both basketball and baseball for North Carolina State University. He was basketball teammates with superstar David Thompson, and had to cover Bill Walton in their Final Four game. But he chose baseball over basketball and never looked back. He had a very successful 13-year big league career, including two seasons as the closer in Baltimore. Stoddard only pitched one season for the Cubs, but it just happened to be their division-winning season of 1984. He was the primary setup mustache for Lee Smith that year, saving seven games and winning ten in 58 appearances. After the season he was granted his free agency, and signed with the team that beat the Cubs in the playoffs, the San Diego Padres. The Cubs got a first round pick as compensation and selected Rafael Palmeiro.