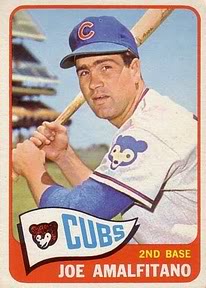 ~Joey Amalfitano 1934 (Cubs 1964-1967)
He not only played for the Cubs, he also managed them twice (1979-1981) as an interim manager after Herman Franks resigned and Preston Gomez was fired. He didn’t have a lot of success as a player or a manager, but has been continually employed in baseball his entire adult life. He’s currently a special assistant for player development for the San Francisco Giants. (Photo: Topps 1965 Baseball Card)

~Jack Quinlan 1927 (Cubs Announcer 1950s/early 1960s)
He was the radio play by play man for the Cubs for nearly a decade, starting in the mid-1950s. When he first began there were several stations covering the Cubs, and he handled the honors for WIND-AM. Beginning in 1957, he moved over to what became the exclusive flagship station of the Cubs, WGN. Jack was at the microphone during both of Ernie Banks’ MVP seasons, and was the first Cubs radio announcer to mention the names of future Hall of Famers Billy Williams, Lou Brock, and Ron Santo. Jack Quinlan was a master of painting a picture with his words, and when he died in a car crash after a golf outing during Spring Training 1965, the Cubs lost one of the best. Since 1967 a charity golf tournament in his name is staged every year to benefit the Boys and Girls Clubs of Chicago.

~Don Nottebart 1936 (Cubs 1969)
He pitched for five teams and even had a no-hitter in 1963 for the Colt 45s, but Nottebart only got into 16 games with the Cubs in 1969. He tore a muscle in his arm, and his career was over. The last hitter he faced in his big league career was Roberto Clemente.

~Dick Burwell 1940 (Cubs 1960-1961)
He got two very short cups of coffee with the Cubs in September of 1960 and 1961. In those two Septembers he pitched in a total of five games, and was hit pretty hard. He walked eleven batters in just over 13 innings of work and gave up two homers. Both of those homers were given up in his first (and only) big league start against the Cincinnati Reds at Crosley Field. Although he didn’t get a lot of time in the big leagues, he did manage to pitch against some Hall of Famers including Frank Robinson in his 1960 debut, and Willie Mays & Orlando Cepeda in his 1961 finale. He was only 21 years old but never made it back to the big leagues. After four more years in the minors, he hung it up at the age of 25.

~Addison Russell 1994– (Cubs 2015-present)
The prized prospect was picked up in the Jeff Samardzija/Jason Hammel trade with Oakland. It was thought that he would be spending the 2015 season in Iowa, but the disappointing play of the big league second basemen forced an earlier call-up. When he took his first at-bat in April, Addison was the youngest player in all of baseball. Russell had a tremendous rookie season, eventually wrestling away the starting shortstop position from Starlin Castro. He hit 13 homers, knocked in 54 runs, and played a dazzling shortstop. It wasn’t a coincidence that the Cubs didn’t play as well in the NLCS when Russell was out with a strained hamstring. With a healthy Russell in 2016, the Cubs won it all. Addison was named the starting shortstop in the All-Star game, hit 21 homers, and knocked in 95 RBI in his first full season. In the 2016 playoffs he came up big again, hitting three homers and knocking in 14 runs — including 9 in the World Series. The 2017 season, on the other hand, was a disappointment. Addison struggled with injuries and was limited to less than 400 at-bats. He did manage to hit 12 homers in the regular season and another in the NLCS. In retrospect, the Cubs would have been happy if the story remained that way. The Addison Russell saga took a dark turn in 2018 when he was suspended by the league for domestic abuse. He never really recovered from that in 2019. By the time the season ended, Russell was an afterthought at the end of the bench. Rarely has a player fallen that far in such a short period of time.