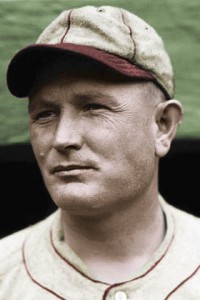 ~Earl Smith 1891 (Cubs 1916)
He got his cup of coffee with the Cubs in their first season at their current ballpark. During that 1916 season, the corner outfielder got only twenty-seven at-bats, all of them in the month of September. He did manage seven hits, including a double and a triple, but the Cubs released the 25-year-old after the season. He later resurfaced with the Browns and the Senators. (This photo is from 1919)

~Geovany Soto 1983
He was the Rookie of the Year and an all-star for the Cubs in 2008, but never even came close to living up to those numbers again. It all started going downhill for Geo when he tested positive for pot in the 2009 World Baseball Classic when he was playing for his native Puerto Rico. The Cubs traded him to the Rangers in 2012.

~John Baker 1981 (Cubs 2014)
The highlight of Baker’s Cubs career was when he came in to pitch a scoreless inning during an extra inning game. That was mainly memorable because Baker was a catcher. As the backup to Wellington Castillo he hit only .192. He was granted free agency after the season.