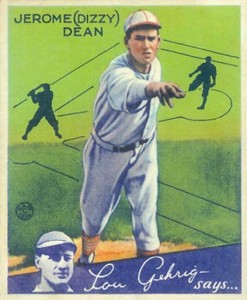 ~Dizzy Dean 1910 (Cubs 1938-1941)
He was colorful, exciting, cocky, and the best pitcher in baseball. Unfortunately, that last description only applied to his years before he joined the Cubs in 1938. His best years were with the Cardinals, where he led the league in strikeouts 4 times, wins twice (including 30 wins one year), innings pitched three times, complete games three times, and even saves once. In 1934, he won the Most Valuable Player award when he led the Cardinals to the World Championship. During those years he was undoubtedly the cockiest player in the game. (Photo: 1934 Goudy Baseball Card)

He suffered an arm injury, however, and by the time Cubs owner P.K. Wrigley ordered his scouts to acquire Dean at any cost, he was just an ordinary pitcher. They signed him for $185,000 in 1938, which was a huge contract for the time. Dean helped the Cubs win the 1938 National League pennant, and pitched pretty well in Game 2 of the World Series before losing to the New York Yankees in what became known as “Ol’ Diz’s Last Stand.” After that, he was done. He tried to pitch for the Cubs until 1941, but he just couldn’t do it anymore. He retired after that season. That’s when he started his second popular career: radio broadcaster. His malapropisms were legendary, and fans loved it. In 1950 he began doing baseball’s Game of the Week on national television. He remained in sportscasting for more than 20 years.

~Bob Ramazzotti 1917 (1949-1953)
The Cubs got him from the Dodgers in the 1949 season, and the oft-injured hard-luck scrapper played the next few seasons in Chicago as a backup infielder. Read his really interesting profile at the Baseball Biography Project.

Cardinal Francis George 1937 (Cubs fan 1937-present)
While he was certainly honored to be named a Cardinal by Pope John Paul II, there must have been a small twinge in the heart of Francis George when the title was bestowed upon him. After all, the Cardinal is a Cub fan, and every Cubs fan knows that being called a Cardinal must be a bittersweet experience at best. Cardinal George grew up on the Northwest Side of Chicago, and has been rooting for the Cubs since he was a young boy. It was one of the first things he told the press when he was named the Archbishop of Chicago in May of 1997. He considered a Cubs victory on the day he was installed a sign that being named the spiritual leader of Chicago’s 2.4 million Roman Catholics was meant to be. Cardinal George was interviewed for the documentary film “We Believe”. The filmmaker, John Scheinfeld, wasn’t surprised to hear the Cardinal talk in general terms about the concept of believing in something with sheer faith, but he got much more than that. He got a Cardinal that has followed this team for sixty years and has given the subject matter a great deal of thought. Francis sees parallels between being a Christian, and being a Cubs fan. Scheinfeld describes the Cardinal’s take on it this way: “Being a Cubs fan is not dissimilar to eschatological faith, which is sort of ‘next year in Jerusalem.’ It’s sort of, ‘Jesus will be coming back at one point. We know it’s going to happen, but we don’t know when.'” Cardinal Francis George is absolutely right about that. “Wait til next year” is something Christians have been saying for way longer than a measly century or so. No wonder the Cardinal was a Cubs fan. He passed away in 2015.
AUDIO: