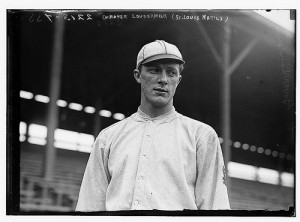 ~Grover Cleveland Lowdermilk 1885 (Cubs 1912)
When your real name is a mouthful like Grover Cleveland Lowdermilk, you’re bound to get tagged with a nickname. He was tall (6’4″) and lanky (190 lbs), so his Cubs teammates dubbed him “Slim”. Slim was born just a few months before President Cleveland officially took office. He didn’t fare so well with the Cubs. His ERA was 9.69. He was later a member of the 1919 Black Sox (but wasn’t implicated in their cheating).

~Jock Menefee 1868 (Orphans/Cubs 1900-1903)
Jock was a pitcher for the Cubs, and is the last National League pitcher to ever pull off a successful steal of home.

~Dick Culler 1915 (Cubs 1948)
He was a slick fielding infielder for eight big league seasons, but just one with the Cubs. He was primarily a backup in Chicago; his second-to-last season in the bigs.

~William Brennan 1963 (Cubs 1993)
Obviously he’s not the movie, television, and recording star from a bygone age, he’s a pitcher. In 1993 he got a cup of coffe with the Cubs, and pitched respectably in his eight appearances. Trouble was, he was already 30 years old. His appearance on October 2, 1993 was his final one in the big leagues. He pitched two innings against the Padres and gave up a homer to Melvin Nieves.

~Delino Deshields 1969 (Cubs 2001-2002)
Delino DeShields had a very respectable big league career. He finished second in the Rookie of the Year voting with the Expos in 1990, and had two great years with Montreal after that. They were so good, in fact, the Dodgers traded Pedro Martinez to get him. Whoops. By the time Delino came to the Cubs, he was at the end of his career.

~Ray King 1974 (Cubs 1999)
King got his start with the Cubs, but pitched another nine years after he left them. In 593 career appearances he never started a game.