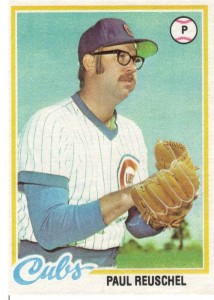 ~Paul Reuschel 1947 (Cubs 1975-1977)
When he was called up to the Cubs in 1975, his little brother Rick was already the ace of the staff. Rick was a starting pitcher, but Paul was used almost exclusively out of the bullpen (he started two games for the Cubs in 1976). The highlight of his career was undoubtedly August 21, 1975, during his rookie season. Brother Rick pitched a shutout for 6 1/3 innings before tiring, and Paul was brought in to finish off the Dodgers. He pitched the last 2 and 2/3 innings, and also didn’t allow a single run. The Cubs won the game 7-0. The Reuschel brothers remain the only siblings in Major League history to combine for a shutout. (Photo: Topps 1978 Baseball Card) While this baseball card was in the stores in 1978, Reuschel was traded to the Cleveland Indians, where he pitched the final seasons of his career.

~George Brown 1876 (Cubs 1909)
George was a solid major leaguer for 12 seasons, but only played a portion of one of those seasons with the Cubs. He was a right fielder.

~Roy Easterwood 1915 (Cubs 1944)
It’s safe to say that Roy wouldn’t have made it to the big leagues if it wasn’t for World War II. He played fifteen seasons in the minors, but only for the Cubs during the war season of 1944. Even on a war-depleted roster, Roy didn’t get much playing time. His teammates called him Shag.