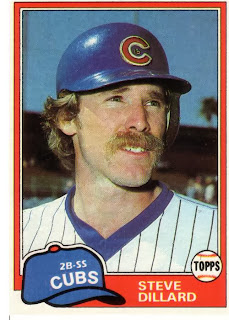 ~Steve Dillard 1951 (Cubs 1979-1981)
Dillard may have only been a backup infielder for the Cubs from 1979-1981, and he may have only hit .225 and .218 in two of those years, but Steve Dillard’s mustache didn’t take a back seat to anyone. He once pulled the hidden ball trick by hiding it in his mustache. Not really, but he could have. His mustache was that spectacular.

~Felix Pie 1985 (Cubs 2007-2008)
He was supposed to be the next big star in Chicago, a five tool outfielder with dazzling talent. Like Corey Patterson before him, Pie never quite put it together. They handed him in the starting center field job in 2008, but he lost it by May. The Cubs signed Jim Edmonds and sent Felix back to the minors. One thing many male Cubs fans will never forget about him is an injury he suffered during his time with the Cubs. It was called “testicular torsion” or twisted testicle. Some of us still have nightmares. The Cubs traded Felix to the Orioles in 2009.

~Joe Maddon 1954 (Cubs 2015-present)
The day Joe Maddon appeared at the press conference announcing his hiring, Chicago was instantly smitten. Maddon bought the entire press corp a beer, and said that he expected the Cubs to compete for the World Series title (after five years in a row in last place). Maddon’s low-key approach really connected with the young Cubs and he led the team to 97 wins and two playoff series victories in his first year. In 2016 he brought the Cubs to the promised land–the World Series championship. He previously managed the young Tampa Rays to the World Series in 2008.