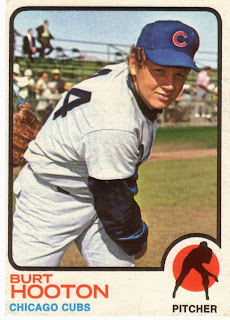 Burt Hooton 1950 (Cubs 1971-1975)
Hooton got off to an incredible start in his big league career. He came up at the end of the 1971 season and had three tremendous starts (2-0, two complete games, one shutout, 22 Ks in 21 innings). In fact, he was so good, the Cubs felt they could afford to trade Ken Holtzman in the offseason. It sure looked good early when Hooton used his incredible knuckle-curve to pitch a no-hitter in his fourth career start. In fact, he pitched well the entire 1972 season, despite going only 11-14. (Photo: Burt Hooton 1973 Topps Baseball Card)

But Hooton slumped a bit in 1973 and 1974, and in the early part of 1975, the Cubs shipped him off to the Dodgers for Geoff Zahn and Eddie Solomon. That turned out to be a terrible trade for Chicago. Hooton was still young and only needed a little guidance, something he got in Los Angeles. He won 18 games for the Dodgers that year, went on to pitch another eleven seasons, became an All-Star, a World Series champ, and a runner-up for the Cy Young Award. Don’t ask what the players the Cubs got in return for him did.

Here’s a little bit of Burt Hooton Cubs trivia. On the day Elvis Presley performed at the Chicago Stadium in Chicago in 1972, Hooton pitched a shutout against the Dodgers at Wrigley Field.

Ted Kennedy 1865 (White Stockings 1885)
He was signed by Chicago in June of 1885 because they were down to one pitcher (John Clarkson) and Kennedy had been doing some incredible things on a team in Keokuk. He pitched nine games for Chicago (and won 7 of them), but developed an arm injury, and was released in September.

Tom Daly 1866 (White Stockings 1887-1888)
His nickname was Tido, and he was a utility man during his time in Chicago, playing every position on the field except pitcher and third base. He managed to parlay that utility role into a 17-season big league career. His brother Joe also played.

Pat Moran 1876 (Cubs 1906-1909)
Moran was a member of the last two championship teams, the 1907 & 1908 Cubs, as their backup catcher. He later managed in the big leagues, and led the Cincinnati Reds to the World Series championship in 1919. It’s not Moran’s fault that the Reds’ opponent, the Chicago Black Sox, threw the series.

Earl Whitehill 1899 (Cubs 1939)
Whitehill won more than 200 games in the big leagues, but only four of those came for the Cubs, in his last big league season. He holds the record for the worst ERA of any 200-game winner in history (4.36). Earl’s career really spans a few different eras. Early in his career, the player/manager of his Tigers team was Ty Cobb. Ten years later, he almost ended Lou Gehrig’s Iron Man streak when he beaned him on April 23, 1933, knocking him unconscious. Gehrig finished the game. By the time he joined the Cubs he was 40 years old.

Dummy Lynch 1926 (Cubs 1948)
Dummy Lynch was a war hero–a paratrooper in World War II. He only got a few at-bats on that very bad 1948 Cubs team, but in his very first big league game, he hit a homer against future Hall of Famer Warren Spahn. That makes Lynch one of only 26 players since 1908 to hit a homer in his first career game, and never hit another one in his career. Despite the less than flattering nickname, Lynch was no dummy. After his baseball career, he became a practicing attorney in Texas.

Juan Pizarro 1937 (Cubs 1970-1973)
He was a two-time All-Star for the White Sox (1963-1964), and came to the Cubs from the Angels in the middle of the 1970 season. Pizarro had periods of brilliance with the Cubs, and often those happened when Tom Seaver was on the mound for the Mets. In September of 1971 he shut out the Mets in Shea Stadium 1-0, and the one run came off the bat of Juan himself, a solo homer against Seaver. But those moments didn’t happen too often. Pizarro was never really more than a spot-starter for the Cubs during his time with them, and never won more than seven games in a season.

Ben Christensen 1978 (Cubs minor leaguer)
The Cubs were coming off a playoff season in 1998, and were off to a good start in 1999, when the wheels suddenly came off the bus. Is it possible that this was some sort of karmic punishment from above? Ordinarily we would say that’s ridiculous. But on June 2, 1999, with the Cubs firmly entrenched in first place, seemingly on their way to a repeat playoff run, the Cubs drafted a pitcher out of Wichita State named Ben Christensen, probably the most controversial draft pick in Cubs history. Why was it so controversial? Ben Christensen had just been suspended for the season by the NCAA for an act so egregious, that it shocked the nation. He was warming up on the mound and felt that the batter in the on-deck circle was timing his pitches. This is, for some reason, considered bad baseball etiquette. So, Ben did what anyone would have done in the same situation. He fired one of his 90-plus mile an hour fastballs directly at the head of the batter…in the on-deck circle. He hit him flush, and severely injured him. The player he hit was never able to play baseball again because of severe vision issues that arose from the incident. Now, it’s true that Ben was considered a stud pitcher at the time, and had been pegged to go at the very top of the draft. And it’s also true that the Cubs were picking low in the first round because they were coming off a playoff season. But there was a good reason every team passed on Ben. He was nitroglycerin. The Cubs received a lot more than bad publicity from the incident. The team immediately fell apart on the field, and Beanball Ben, as the fans called him, never made it to the big leagues.

Scott Feldman 1983 (Cubs 2013)
Feldman was one of the “flip-able” players brought in during the Epstein regime to garner prospects in return, and it worked like a charm. He was traded to the Orioles in July 2013, in exchange for pitchers Jake Arietta and Pedro Strop. Feldman has the distinction of having the most wins in a season by a Jewish pitcher (17 in 2009) since Steve Stone in 1980.