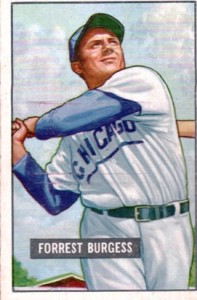 ~Smoky Burgess 1927–1991 (Cubs 1949-1951)
His real name was Forrest Harrill Burgess, but no-one called him that. He was Smoky Burgess, a five-time National League All-Star. He was a very good catcher, but he became even better known as one of the best pinch hitters of his era. He retired with a record 507 pinch at-bats. Only Manny Mota has more than Burgess’s 145 pinch hits. Unfortunately, none of that happened with the Cubs because they traded him after his second season in the majors (1951) for little remembered Johnny Pramesa and Bob Usher. If he had stayed with the Cubs, he could have been their starting catcher for a decade. (Pramesa played 22 games for the Cubs, Usher played 1.) Smoky always said that his most satisfying pinch hit was his home run off Cubs pitcher Sam Jones with two games left in the 1956 season. The Reds, his team at the time, were going for the record–most home runs by a team in a season. The record was 221, and when Smokey came up to bat, the Reds had 220. Reds manager Chuck Dressen ordered Burgess to pinch hit for Roy McMillan, and said, “Make it a home run – or nothin’!” The ball landed on Sheffield Avenue. Smoky ended his career as a pinch hitter for the White Sox—and played until he was 40 years old. (Photo: 1951 Bowman baseball card)

~Ronald Reagan 1911–2004 (Cubs fan 1911-2004)
Reagan didn’t just grow up a Chicago Cubs fan. He owes much of his success to the team. He became a Cubs radio broadcaster, was sent to California to cover the team, took a screen test while he was out there, and became a movie star, which led to his political career. As the president, he returned to Wrigley Field in 1988 to throw out the first pitch. Straight line…Cubs to Cubs.

~Dale Long 1926–1991 (Cubs 1957-1959)
Dale Long had a pretty good career as a Cubs first baseman, but one game is probably remembered more than any other. On August 20, 1958, Cubs catcher Moe Thacker was in the hospital. The Cubs started that game with only two catchers on the roster; Cal Neeman and Sammy Taylor. Taylor was pinch hit for, and Neeman came in to take his place. But Neeman was ejected from the game…meaning the Cubs didn’t have a catcher in uniform to take his place. So, Cubs manager Bob Scheffing sent the ever-reliable Dale Long in to take over. When he entered the game he became the first left-handed catcher in baseball in more than 50 years. (The last before that was in 1906). He did it again a month later on September 11, 1958. There wasn’t another left-handed catcher until 1980 (Mike Squires with the White Sox in a similar emergency role). Benny DiStefano of the Pittsburgh Pirates also did it in 1989. That makes it a grand total of three men in more than one hundred years of Major League baseball; and Dale Long of the Chicago Cubs is the charter member of that exclusive club.

~Walt Huntzinger 1899–1981 (Cubs 1926)
His nickname was “Shakes” and pitched for the Cubs at the end of the 1926 season. He pitched very well out of the bullpen, but after the season was over, he went back to the minor leagues and never returned to the big leagues.

~Travis Wood 1987– (Cubs 2012-2016)
The Cubs got Wood in the Sean Marshall trade, and he has become one of their most reliable starters. In 2013, he started the season with nine quality starts, becoming the first pitcher since Three Finger Mordecai Brown in 1906. His greatest day as a Cub probably came when he hit a grand slam homer against the arch-rival White Sox. He was named to his first All-Star game just a few days later. Unfortunately, his 2014 seaon was a major step backwards. The Cubs moved him into the bullpen in 2015, and he thrived in that role, appearing in 54 games. He saved four, won five, and struck out 118 batters in 100 innings pitched. In 2016, he was a workhorse, appearing in 77 games. In one memorable game, Joe Maddon moved him to the outfield when a righthander was up so that he could bring him back to the mound for the next lefty. Wood made a great catch on a ball hit to the vines. Travis was part of the postseason roster and won a game in the NLDS, but he will probably be most remembered for what he did at the Cubs World Series parade. He wore camouflage at first, and eventually took off his shirt. Asked about his teammate’s odd behavior, Jon Lester replied: “He’s from Arkansas.”