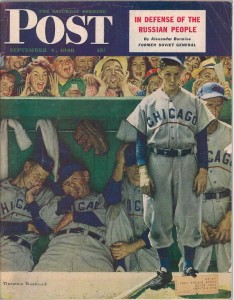 ~Norman Rockwell 1893–1978 (Cubs cover 1948)
How bad were the Cubs in 1948? They finished in last place, 27 ½ games out of first place. Their hitting was atrocious (fewest home runs, fewest walks), their pitching staff was brutal (fewest shutouts, second most walks), their speed was non-existent (fewest stolen bases), and their fielding was embarrassing (second worst in the league). It must have been tough to watch, even for cheerful Jolly Cholly Grimm, the team’s manager that year. That must have been what inspired this cover from artist Norman Rockwell on the September 4, 1948 issue of the Saturday Evening Post. The Cubs manager, the one in the middle who looks like his wife just left him, bears a remarkable likeness to Charlie Grimm.

~Newt Randall 1890–1955 (Cubs 1907)
Newt had a very good minor league career, but didn’t get his shot at the big leagues until 1907. He earned a shot by having a great spring training in New Orleans that year, and came north with the defending National League champs. He was the only rookie on the team. On June 20th of that year, he was traded to Boston in a pretty unusual way. The two managers decided to trade their right fielders as they exchanged lineup cards at home plate. Newt was sent to the Boston dugout, and Del Howard came over to the Cubs. Newt finished the season in Boston, his only season in the big leagues.

~Don “Tiger” Kaiser 1935– (Cubs 1955-1957).
His real first name was Clyde, he went by Don, and everyone called him Tiger. Unlike another well-known Tiger today, Chicago’s Tiger was not controversial. Don Kaiser was a bonus baby pitcher the Cubs signed in 1955 with high hopes. That ’55 Cubs team was as bad as any of Chicago’s incredibly woeful 1950s bunch, so they brought Tiger right up to the bigs and put him in the bullpen. He performed well enough to get a shot at the starting rotation the next year, and the big tall (6’5”) right hander from Oklahoma was 6-15 as a member of the Cubs rotation in ’56 and ’57. He was dealt to the Braves after the ’57 season. Tiger couldn’t crack that loaded NL champion team squad the next spring, however, and never made it back to the big leagues again.

~Joe Coleman 1947– (Cubs 1976)
He pitched in the big leagues for 15 seasons and won 142 games, but only 2 of those came for the Cubs. His father (also named Joe) pitched ten years in the big leagues too, and his son Casey made it to the show as well (with the Cubs).