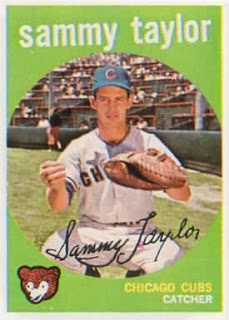 ~Sammy Taylor 1933–2019 (Cubs 1958-1962)
Taylor was a catcher for the Cubs in the late 50s and early 60s. His best season with the bat was 1959, when he clubbed 13 homers. But he also had a very rough time of it behind the plate, leading the league in homers and stolen bases allowed. He was also a key participant in the strangest play in Cubs history, on June 30, 1959 when two balls ended up in play at the same time. It all started when a missed strike three got away from him. Taylor, thinking it was a foul ball, didn’t go after the ball. The bat boy, also thinking it was a foul ball, picked it up and tossed it to field announcer Pat Pieper. Pieper saw that the batter was running to first base, so he realized it was a live ball, and let it drop at his feet. Third baseman Alvin Dark ran over to grab it. Meanwhile, the umpire gave Sammy Taylor a new ball out of habit. In the confusion, the runner on first base, Stan Musial, made a run for second base. Cubs pitcher Bob Anderson took the ball out of Sammy Taylor’s catcher’s mitt and fired it to second base at the same time that third baseman Alvin Dark threw his ball to second base. Ernie Banks was covering second and caught one of the balls heading his way, while the other ball escaped into centerfield. Ernie tagged out Musial with one ball, while center fielder Bobby Thomson lobbed the other ball into the dugout. Thinking that “real” ball has been tossed into the dugout, Musial kept on running and scored. The umpires had a very long discussion about this play on the field before finally ruling that Musial was out because Ernie tagged him. The Cardinals were enraged by the call on the field and lodged an official protest. The protest wasn’t necessary. The Cardinals won the game anyway, 4-1. (Photo 1959 Topps Baseball Card)

~Bud Teachout 1904–1985 (Cubs 1930-1931)
Bud had a good rookie season in 1930, winning 11 games with a 4.06 ERA, quite an accomplishment considering 1930 was a season for hitters. Many hitting records were set that year, including Hack Wilson’s 191 RBI. Bud’s Cubs team, however, choked a big lead down the stretch, and just missed repeating as NL Champs. That collapse cost Hall of Fame manager Joe McCarthy his job. (He went to the Yankees and won seven World Series, including one against the Cubs). Teachout was traded in 1931 along with Hack Wilson in the trade that brought Burleigh Grimes to Chicago.

~Leroy Herrmann 1906–1972 (Cubs 1932-1933)
He pitched in relief for the pennant winning 1932 Cubs, but didn’t make it on the postseason roster. Leroy pitched in 16 games over his two Cubs seasons, earning two wins and a save, but struggling mightily with big league hitters. His lifetime ERA is over 6.

~Carl Warwick 1937– (Cubs 1966)
Warwick was an outfielder for six big league seasons. He was the starting centerfielder for the expansion Houston Colt 45s, but was mainly a defensive replacement for the Cubs in 1966, for whom he got his final twenty-two at-bats in the majors. He earlier played for the Orioles, Cardinals and Dodgers.

~Ron Hassey 1953– (Cubs 1984)
Hassey had a long and successful career as a backup catcher (14 seasons in the big leagues). He came to the Cubs along with Rick Sutcliffe in the trade that sent Joe Carter and Mel Hall to the Indians. Hassey didn’t get a lot of playing time backing up Jody Davis, but he was a part of the team that won the division. The Cubs traded him to the Yankees after the 1984 season.

~Matt Stairs 1968–  (Cubs 2001)
Stairs was brought in to play first base for the Cubs, even though he had previously only played a handful of games at that position. It didn’t work out. The Cubs traded for Fred McGriff at the trading deadline to take his place. Nevertheless, Stairs did hit 16 homers in a Cubs uniform, and got several clutch hits during that 2001 season. That was his only year in Chicago, but he did play ten more seasons in the big leagues, and won a ring with the Phillies in 2008.

~Craig Monroe 1977– (Cubs 2007)
The Cubs acquired Monroe from the Tigers to help them down the stretch during their division winning season of 2007. He had been a key contributor the Tigers’ World Series team the previous year, but he fizzled in Chicago, hitting only .204, and not making the postseason roster. Two bits of trivia about Monroe: his mother is named “Marilyn Monroe” and his cousin is former Bears defensive back Nathan Vasher.