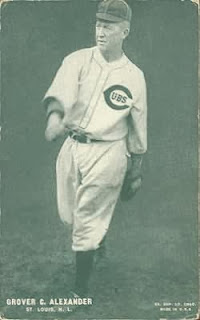 ~Grover Cleveland Alexander 1887–1950 (Cubs 1918-1926)
His 373 wins are the third most in baseball history. And yes, he was a Cub. He won 128 games in his years with the Cubs, and had one of the best seasons in baseball history in 1920, when he led the league in wins, ERA and strikeouts. But Alexander was troubled during his Cubs years. The only reason they got him at all was because the owner of the Phillies didn’t want to get stuck paying the contract of his star pitcher (a three-time 30 game winner) if he got drafted into World War I. He did get drafted, and he came back from the war a changed man. Old Pete, as he was known, became one of the biggest drinkers in the league–during Prohibition. He showed up drunk to games. He fell asleep in the clubhouse and passed out drunk in the dugout. He smoked like a chimney before every game. He ignored his manager, and openly challenged his authority. The Cubs were understanding up to a point. After all, the man was suffering through medical, physical and mental problems. He was an epileptic, and was prone to seizures. His arm started hurting during his Cubs career, and he had the ligament “snapped back into place” by a man named James “Bonesetter” Smith. And throughout it all he was suffering from post-traumatic stress disorder after his horrific war experience. Somehow, against all odds, he continued to pitch well. In 1923, he pitched 305 innings and walked only 30 men. In 1924, he won his 300th game. But in 1926, after his catcher and best friend Bill Killefer went to the Cardinals, Alexander fell apart. In his last ten games with the Cubs, Old Pete showed up drunk six times, and missed two games altogether. The Cubs released him and the Cardinals picked him up on waivers. Back with his best friend Killefer, he regained his pitching touch and led the Cardinals to the World Series championship, winning Game 6, and saving Game 7 of the 1926 series. Two years after his 1950 death, his story was told in the film “The Winning Team,” starring Ronald Reagan. Grover Cleveland Alexander remains the only player in baseball history to be named after a president, and portrayed in a movie by a president.

~Harry Weaver 1892–1983 (Cubs 1917-1919)
Harry pitched for the Cubs during their early years in the new ballpark on Clark & Addison. He won three games in three big league seasons, but pitched fairly well in his limited opportunites. Harry stuck around in the minors until 1924.

~Joe Graves 1906–1980 (Cubs 1926)
Joe played exactly one day in the big leagues, and it was for the Cubs on September 26, 1926, the last day of the season. He played third base in the first game of a double header against Brooklyn and got one at bat against Dazzy Vance (he didn’t get on base). He started the second game of the double header and went 0 for 4. The Cubs lost both games.

~Don Lee 1934– (Cubs 1966)
He pitched in 16 games for the Cubs and went 2-1 with a 7.11 ERA. That was a very bad team…in fact, it still has the worst record in Cubs history (103 losses). His stint in Chicago marked the end of his big league career. He finished up with 40 wins in nine big league seasons with the Tigers, Senators, Twins, Angels, Astros and Cubs. His father Thornton also pitched in the Major Leagues (mostly for the White Sox)

~Jose Reyes 1983– (Cubs 2006)
Not to be confused with the stud infielder Jose Reyes (Mets, Marlins, Blue Jays), this Jose Reyes was a catcher who got a cup of coffee with the Cubs at the end of the 2006 season. He batted five times and struck out three of those times. He also got 2 RBI with his only big league hit. He was signed by the Mets the following year but never made it up to their big league club.

~Hector Rondon 1988– (Cubs 2013-2016)
The Venezuelan was a Rule 5 pick for the Cubs, and made their opening day roster in 2013. He pitched in 45 games for a team that people simply stopped watching. In 2014 he became the team’s closer after Jose Veras couldn’t handle the job and Hector saved 29 games. He followed that up with a 30-save season in 2015. Around the trade deadline in 2016, the Cubs thought they needed a bullpen upgrade, so they traded for Aroldis Chapman and moved Hector into the set up role. He never really thrived there. First he suffered an injury, and when he returned, he never could quite put it all together. He pitched in the World Series for the Cubs, but unfortunately surrendered a home run. 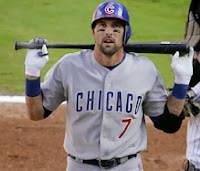 ~Mark DeRosa 1975– (Cubs 2007-2008)
DeRosa played 16 seasons in the bigs, the best two of which were with the Cubs. He was an important part of the first back-to-back playoff teams for the Cubs in a century. DeRosa played wherever the Cubs needed him (OF, 1B, 2B, SS, 3B), and seemed to get all the clutch hits. He can’t even be blamed for the collapse in both of those playoff series because he hit over .300 each time, although he did make a key error in Game 2 of the 2008 NLDS. The Cubs traded him after the season for pitcher Chris Archer. Before retiring, DeRosa won a World Series ring as a member of the 2010 San Francisco Giants.