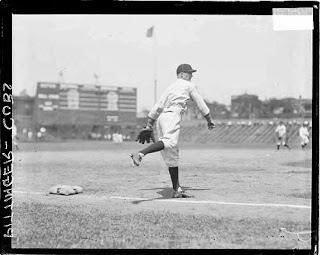 ~Pinky Pittenger 1899–1977 (Cubs 1925)
Pinky was a back up third baseman and shortstop for a Cubs team that made history–they were the first Cubs team to ever finish in last place. After that blip year of 1925, the Cubs didn’t finish in last place again for another 23 years. Pinky’s real name was Clark Alonzo Pittenger, and he was one of the most educated players on the team…he had gone to dental school at Ohio State University. Of course, that didn’t stop him from getting involved in an altercation along with his manager (the instigator) Rabbit Maranville, after which both of them wound up in jail. Pinky only played with the Cubs for one season (1925), and he hit .312 in limited action, but the Cubs released him after that season. He played parts of 7 seasons in the majors (3 with the Red Sox, 3 with the Reds, and 1 with the Cubs) and in more than 1000 Major League plate appearances he managed to hit exactly one home run.

~Wilbur Cooper 1892–1973 (Cubs 1925-1926)
Cooper is one of the most successful left-handed pitchers in baseball history. He was a four-time 20-game winner, and won over 200 games in his big league career. The Cubs got him along with Charlie Grimm and Rabbit Maranville after the 1924 season. He had just won 20 games for the Pirates, and was not happy to be traded to the Cubs. He felt the Pirates were on the verge of winning it all, and he was right. The trade robbed him of his only chance to pitch in the World Series. (The Pirates won it all in 1925). His time in Chicago was disappointing. He went 12-14 for the last place 1925 Cubs, and was released in June of the following year. At that time he had the career record for most innings pitched and games started as a left-handed pitcher; records that have since been broken.

~Mike Sember 1953– (Cubs 1977-1978)
Sember was a local boy (Hammond, Indiana) who got a cup of coffee with the Cubs in the late 70s. He was mainly a defensive replacement at shortstop and third base. Sember had a grand total of seven career big league at bats (all with the Cubs), and got two hits (both singles).

~Rob Bowen 1981– (Cubs 2007)
The Cubs got him from the Padres in the Michael Barrett trade in June of 2007, and Bowen was expected to become their regular catcher. After going 2 for 31, the Cubs traded him to the A’s a month later for Jason Kendall.