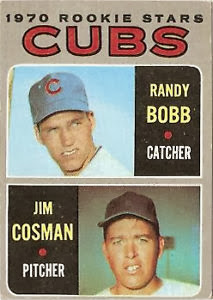 ~Jim Cosman 1943–2013 (Cubs 1970)
Though Cosman is listed as a “Rookie Star” on this Topps baseball card, he pitched briefly for the Cardinals in 1966 and 1967 before coming to the Cubs. The big right-hander (6’5″) had control problems throughout his pitching career. With the Cardinals he walked 24 men in 31 innings in 1967. He didn’t make it back to the majors until the Cubs gave him a shot three seasons later. The date was April 30, 1970, and the Cubs were facing the Atlanta Braves. Chicago was already down 6-2 when Cosman came in to start the seventh inning. The first batter he faced was Hank Aaron and Aaron took him deep. Cosman didn’t make it out of the inning, and never pitched in another big league game. After leaving baseball he became a successful executive in the waste management business. He passed away in January of 2013.

~Miguel Batista 1971– (Cubs 1997)
Miguel was a member of that horrible ’97 Cubs team, and he didn’t pitch particularly well either (5.70 ERA), but he did serve a very important role. He was the trade bait that convinced the Montreal Expos to trade Henry Rodriguez to the Cubs. Henry was a key part of the Cubs 1998 playoff team and helped stablize a position (left field) that had fielded eleven different opening day starters in the previous eleven seasons. Batista pitched for 18 seasons in the big leagues with the Pirates, Marlins, Expos, Royals, Blue Jays, Mariners, Nationals, Mets, Braves, and the 2001 World Champion Arizona Diamondbacks. (The team that broke the ex-Cub curse. Two other ex-Cubs were on that team–Mark Grace & Luis Gonzalez)