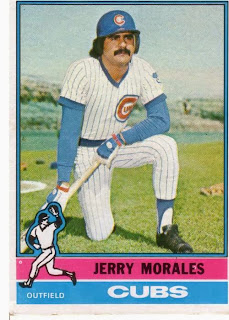 ~Jerry Morales 1949–  (Cubs 1974-1977, 1981-1983)
Jerry was acquired in the trade with the Padres that cost the Cubs fan favorite Glenn Beckert, but Morales would have a very respectable Cubs career. For parts of two decades his reliable glove patrolled all three outfield positions for the Cubs. His best season in a Cubs uniform was probably 1977. Morales was named to the All-Star team that year, and even scored a run in the 1977 All-Star Game. But to many of his Chicago fans, Jerry Morales will remembered for his most impressive off-the-field accomplishment. In the era of the bushy mustache, Jerry managed to grow the bushiest.

~Walter Thornton 1875–1960 (Colts/Orphans 1895-1898)
He was an outfielder and a pitcher for Chicago (when that was still relatively commonplace), and had a few respectable seasons, but he will always be remembered most for what happened on August 21, 1898. He took the mound in the second game of a doubleheader against Brooklyn (then known as the Bridegrooms) and pitched a no-hitter. Chicago won the game 2-0. After the season he left baseball in a contract dispute (at the age of 23). He later became a devout follower of another ex-Chicago-ballplayer, Billy Sunday. In the last few years of his life (he lived until 1960), he roamed the city of Los Angeles as a street preacher, doing whatever he could to help the poor.

~Zip Zabel 1891–1970 (Cubs 1913-1915)
When the Zabels had their little boy in Kansas around the time of George Washington’s birthday, they named him George Washington Zabel. But no-one ever called him George. His teammates called him Zip. Zabel pitched for the Cubs during their last three seasons at the rickety firetrap known as West Side Grounds (1913-1915). On June 17, 1915 he set a record there that will never be broken. He came in to spell Cubs starter Bert Humphries in the first inning, and went on to pitch the next 18 and 1/3 innings in relief. He faced 78 batters in those innings, and only gave up two runs. The Cubs finally won the game 4-3 in the bottom of the 19th.

~Kevin Tapani 1964– (Cubs 1997-2001)
Tapani was coming off seven consecutive double-digit-win seasons in the American League (and a World Series championship in Minnesota) when he joined the Cubs before the 1997 season. He didn’t realize it at the time, but he was walking into a buzzsaw. That ’97 Cubs team lost their first 14 games on the way to a humiliating last place finish. On the other hand, Tapani was a key contributor the following season when the Cubs made it to the playoffs. He won 19 games during the regular season, and was leading the Braves 1-0 in the bottom of the ninth inning in Game 2 of the NLDS when Ryan Klesko touched him for a game-tying homer. The Cubs lost it in the 10th. Tapani lost it the following year, and never put up those kind of numbers again.

~Shawn Estes 1973– (Cubs 2003)
He was the fifth starter on a Cubs team that also sent Wood, Prior, Zambrano, and Clement to the mound. Estes was clearly the weak link. Dusty Baker remembered him fondly for his 19-win All-Star season with the Giants (Dusty was his manager), so he kept sending him out there every five days, and Estes kept getting rocked. His ERA in 28 starts was 5.83. The Cubs unloaded him after the season and he won 15 games for the Rockies in 2004. Shawn’s claim to fame (other than his incredible 1997 season) happened on May 24, 2000. He became the first Giants pitcher to hit a grand slam home run.

~Brian Bogusevic 1984– (Cubs 2013)
He was drafted as a pitcher by the Astros, but converted to outfield. The Cubs signed him as a free agent before the 2013 season, and Brian would have had a decent chance to log significant playing time on that team, but he kept getting hurt. After the season he was traded to the Marlins for Justin Ruggiano.