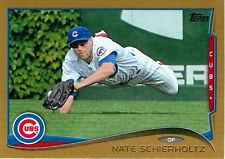 ~Nate Schierholtz 1984– (Cubs 2013-2014)
Nate was one of the budget free agent signings by the Epstein/Hoyer regime. He won a ring with the 2010 Giants, but he was never really given a chance to be a fulltime player until he arrived in Chicago. In his first season with the Cubs he hit more than 20 homers and played a very strong right field. It all fell apart in 2014, however, and by the end of the year, he was gone. (PHOTO: 2014 Topps Baseball Card)

~Charlie Irwin 1869–1925 (Colts 1893-1895)
The team was still known as the Colts when Charlie manned third base and shortstop for Chicago. In 1894 he had a great season with the bat (100 runs batted in), but he was also the worst infielder in all of baseball. That season he committed 91 (91!) errors. He later played for the Reds and Brooklyn during a pretty respectable 10-year big league career, and he settled in Chicago after his playing days were over. That’s where he was hit by a bus and killed in 1925.

~Chuck Estrada 1938– (Cubs 1966)
He pitched for the Orioles for several seasons before coming to the Cubs, leading the American League in wins as an All-Star rookie in 1960, and in losses in 1962. He got one start with the Cubs in 1966 and didn’t make it out of the first inning. His final Cubs ERA after pitching out of the bullpen the rest of the season was 7.30.

~Footer Johnson 1932– (Cubs 1958)
His real name was Richard Allen Johnson, but everyone called him Footer or Treads because he was fast. He was known for his speed in the minor leagues and at Duke University (he was there the same time as Dick Groat), but he didn’t make much of an impact in his very short major league career. In 1958, Footer got a grand total of 5 at bats in 8 games (his other three appearances were as a pinch runner), but never got a hit. He did, however, score one run when he pinch ran for Cubs catcher Sammy Taylor during a double header on June 22nd. He was knocked in by another obscure Cub…future manager Chuck Tanner.

~Ron Cey 1948– (Cubs 1983-1986)
Ron Cey earned his nickname because of the way he waddled when he walked. One look at his stocky build, short legs, and choppy running style was all it took to see that “The Penguin” was a perfect nickname. Cey was one of the first “star” players (not affiliated with the Phillies) acquired by Dallas Green. He was a 6-time all-star and a World Series MVP with the Los Angeles Dodgers. (The Cubs got him for Vance Lovelace and Dan Cataline, which has to qualify as a rare good trade.) When Cey joined the Cubs they offered him an incentive they’ve probably never offered since…a bonus for increased attendance. That little clause paid off nicely for the Penguin. Even though Cey was definitely on the downside of his career, he had a few good years left in him. He hit 25 HR and 97 RBI (which led the team) in the Cubs playoff year of ’84. He also hit a home run in the ’84 NLCS. Unfortunately, in that series another former Dodger stuck a dagger in the heart of Cub fans everywhere.

~Rolando Roomes 1962– (Cubs 1988)
Rolando was born and raised in Jamaica, and it took him quite awhile before he got his cup of coffee (16 at bats) with the 1988 Cubs. He was 26 years old at the time. The Cubs traded him to the Reds for Lloyd McClendon after the season. While McClendon was an important part of the 1989 division winning Cubs, Roomes was out of baseball by 1990.

~Brian Williams 1969– (Cubs 2000)
Williams showed some promise early in his big league career with the Astros, finishing in the top ten in the Rookie of the Year voting that season, but the pitcher really struggled after that. The Cubs were desperate when they signed in January of 2000. It didn’t work out. He pitched in 22 games and his ERA was a staggering 9.62. The Cubs released him at the end of May.