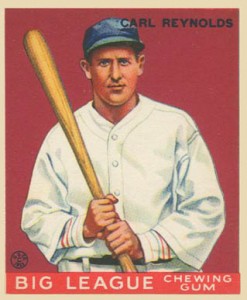 ~Carl Reynolds 1903 (Cubs 1937-1939)
He was a ten-year veteran of the big leagues when he joined the Cubs in 1937, and claimed a starting outfield spot on the 1938 pennant winners. But in the World Series he came up to bat thirteen times and only got on base once (via walk). He went back to fourth outfielder in 1939–his last season in the big leagues. (1933 Goudy Baseball Card)

~Lew Brown 1858 (White Stockings 1879)
Brown was a catcher and considered a troublemaker. After he left Chicago he was suspended for an entire season for “general insubordination”. One night, at the age of 30, he was wrestling with a friend, and twisted his knee. He went into the hospital for treatment, contracted pneumonia, and never came out again. The January 23, 1889 issue of Sporting Life had his obituary, and praised his catching abilities during an age when the catchers didn’t wear any equipment (including mitts) or padding.

~Walt Golvin 1894 (Cubs 1922)
He got his cup of coffee with the Cubs early in the 1922 season as a 28-year-old rookie. The first baseman got two at bats and didn’t reach base either time. He played another three years in the minors after that, and retired for good at the age of 31.

~Kent Mercker 1968 (Cubs 2004)
Merker was a good relief pitcher for the Cubs in 2004, appearing in 71 games as a left-handed specialist and registering a 2.55 ERA, but he is most remembered for his role in driving Steve Stone away from the Cubs broadcasting booth. On September 30, 2004, after the Cubs had choked away a nearly certain playoff spot, Steve Stone assessed the team on the air. He said the 2004 Cubs were: “(a) bunch of talented guys who want to look at all directions except where they should really look and kind of make excuses for what happened. … At the end of the day, boys, don’t tell me how rough the water is, you bring in the ship.” Kent Mercker was particularly vocal about what he considered a betrayal. Stone resigned after the season.

~Phil Norton 1976 (Cubs 2000-2003)
He didn’t exactly start his Cubs career well. In his second start he gave up four homers in one inning to the Dodgers. Light-hitting Kevin Elster knocked one out, then the pitcher Darren Dreifort did. Gary Sheffield followed that up with a solo homer, and Shawn Green hit a 2-run shot. The Cubs lost the game 7-5.

~Austin Jackson 1987 (Cubs 2015)
Austin was acquired in late August to augment the Cubs outfield heading into the playoffs. When Jorge Soler went down with an injury, Jackson got quite a bit of playing time. Unfortunately, he never really found his groove in a Cubs uniform. In 79 at bats, he hit only .236. Jackson did provide a steady glove in the outfield, however, and because of that got playing time in all three postseason series. He was granted his free agency after the season.