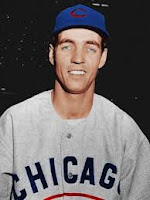 ~Dutch McCall 1920 (Cubs 1948)
McCall pitched one full season in the majors (1948) as a 27-year-old rookie, and was among the league leaders in several categories, most notably walks and losses. In fact, he set the Cubs record by recording 13 losses in a row. He also led the Cubs in home runs allowed, and the Cubs starters in highest ERA…and he was their #3 starter. The Cubs finished 27 ½ games out of first place that year, in dead last.

~David Aardsma 1981 (Cubs 2006)
The Cubs picked up Aardsma in the trade that sent Latroy Hawkins to the Giants. He pitched out of the bullpen for the entire 2006 season and had a respectable year (3-0, 4.08 ERA, 45 appearances), but the Cubs traded him to the White Sox the following season for Neal Cotts. Aardsma didn’t really find his niche in baseball until a few seasons later when the Mariners converted him to closer. Over the next two seasons he saved 69 games.

~Cole Hamels 1983– (Cubs 2018-2019)
The Cubs picked up the former World Series MVP (for the Phillies), and the last pitcher to no-hit them (July 2015), at the trading deadline in 2018. Hamels pitched like he had been doused in the fountain of youth. After struggling in Texas, Hamels dominated in his 12 starts with the Cubs. He had a 2.38 ERA, struck out 72 in 74 innings, and was the team’s best pitcher down the stretch. He pitched so well, the Cubs picked up his option for 2019. It looked like a great decision at first, as Cole pitched like his old self for the first half of the season. After he injured his oblique, however, he was never the same. A long stint on DL, followed by a hurried return, left the Cubs with a damaged Hamels. During the stretch run, he just wasn’t the same pitcher. Cole Hamels trivia: His wife Heidi was once a contestant on the show Survivor.

~Raul Gonzalez 1973 (Cubs 2000)
The Puerto Rican outfielder made his big league debut in a Cubs uniform in May of 2000, but he only got two at-bats with the Cubs and struck out both times. He later played for the Reds, Mets, and Indians.

~Byron Browne 1942 (Cubs 1965-1967)
Byron was the starting left fielder for the Cubs during the 1966 season and clubbed 16 homers, but he also led the league in strikeouts. He was traded to the Cardinals in 1968, and was later involved in the infamous Curt Flood/Dick Allen trade which led to Flood challenging baseball’s reserve clause. He finished his career with the Phillies.

~Phil Gagliano 1941 (Cubs 1970)
Gagliano played 12 seasons in the big leagues (including 1970 with the Cubs), but he never claimed a starting job in all that time. The infielder played a little first, second, and third base for Chicago in 26 games, and hit .150.

~Charlie Brewster 1916 (Cubs 1944)
Charlie played 17 seasons in the minors, but also got a few tastes of the big time, including a ten game stint with the Cubs in 1944. The shortstop hit .250 as the replacement for Lennie Merullo, and then was shipped back down to the minors.

~Pete Lamer 1873 (Orphans 1902)
His real first name was Pierre, and he played only two games for the Cubs (then known as the Orphans) in September of 1902. The catcher got nine trips to the plate, and singled twice.

~Bill Bishop 1864 (White Stockings 1889)
Bishop appeared in two games for Chicago in September of 1889 and was rocked for 13 runs in only three innings, but he also somehow recorded saves in both appearances. He never pitched in the big leagues again.