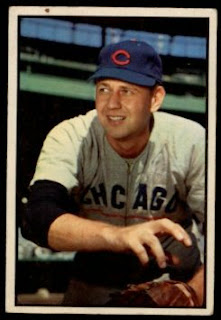 ~Bob Rush 1925 (Cubs 1948-1957)
The big righthander was a two-time all-star for some pretty bad Cubs teams. He won over 100 games in a Cubs uniform, including a 17-win year in 1952, and four different seasons with 13 wins. The Cubs traded him to the World Champion Milwaukee Braves after the 1957 season, and the veteran finally got a chance to pitch for a winner. He won 10 games for the 1958 pennant winners, and started Game 3 of the 1958 World Series against the Yankees. He and the Braves lost the game 4-0. (Photo: 1953 Bowman Baseball Card)

~Brian Schlitter 1985 (Cubs 2010, 2014-2015)
The local boy from Maine South High School broke into the big leagues briefly with the Cubs in 2010, but didn’t fare well. After a few more seasons in the minors, he re-emerged in 2014 and became a key part of the bullpen. New Cubs manager Joe Maddon thought he would be a big part of the bullpen in 2015, but Schlitter was rocked hard early and often. In only ten appearances, his ERA was north of seven. He is known for his long floppy hair and 95 MPH fastball.

~LaTroy Hawkins 1972 (Cubs 2004)
The Cubs signed LaTroy to be their closer after Joe Borowski went down with an arm injury. Hawkins, a local kid from Gary Indiana, had pitched incredibly well with the Twins the previous few seasons. He had some good moments with the Cubs too, but he also had some very bad moments. He saved 25 games, but he blew consecutive saves down the stretch at the worst possible time. The Cubs had a playoff spot in their hands and LaTroy blew it. Hawkins gave up ten homers that year–a very big number for a closer. The Cubs shipped him off to the Giants in 2005. Latroy later led the 2007 Rockies to the World Series. He also pitched for the Orioles, Yankees, Astros, Brewers, Angels, Mets, and Rockies again. His final appearance of the 2014 season was the 1000th appearance of his big league career.

~Pete Scott 1897 (Cubs 1926-1927)
He was a part-time first baseman/outfielder for the Cubs for two seasons, but he paid huge dividends for them. Scott and teammate Sparky Adams were traded to the Pirates for future Hall of Famer Kiki Cuyler.

~Dell Darling 1861 (White Stockings 1887-1889)
Darling was a backup catcher for the Cubs (then known as the White Stockings) for a few seasons, but he bolted in the player revolt of 1890 along with many other players on his team. He later played for St. Louis.

~Cy Williams 1887 (Cubs 1912-1917)
The Cubs centerfielder was the NL home run champ in 1916 with a whopping 12 homers. After the 1917 season, the Cubs traded Cy to the Phillies for a soon-to-be washed up Dode Paskert, center fielder for center fielder. Williams had been pretty good for the Cubs, but after the trade to the Phillies he blossomed into a star. He hit 217 of his 251 career home runs for the Phillies, and by the time he retired in 1930, he was one of only three players in major league history with over 250 career home runs (the other two were Babe Ruth and Rogers Hornsby). Paskert had two good years with the Cubs (although he helped them win the pennant in 1918), but his speed, which had been a key part of his game, was nearly gone. After the 1920 season he was released.

In the off season the Cubs did what they had to do; they traded Kingman back to the Mets. After news of Kingman’s trade became public, his teammates all expressed relief that he was gone. Royko even became a Cubs fan again.And though Dave Kingman continued to slug homers (he hit another 172 in his career), and retired with the most career homers of any player not in the Hall of Fame, he never even got a sniff from Hall of Fame voters. It’s hard to get votes from baseball writers when you’re remembered for throwing ice cold water at one of their colleagues.

~Taylor Teagarden 1983 (Cubs 2015)
Teagarden was a highly regarded prospect for the Rangers (he also played for the Orioles and Mets) who never quite figured out how to hit big league pitching. But his catching skills kept getting him in the big leagues, including a stint for the Cubs in 2015. He appeared in eight games and hit .200 (.002 below his lifetime average).