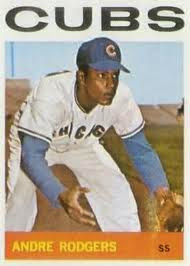 ~Andre Rodgers 1934 (Cubs 1961-1964)
Andre was the first player from the Bahamas to play in the big leagues. He was a great cricket player in his homeland who heard about baseball and came to America to give it a shot. It took him a few years to make it, but the talented athlete eventually played for the Giants, Cubs, and Pirates over an 11-year career. With the Cubs he took over the shortstop job when Ernie Banks was moved to first base. He and Ken Hubbs made a great double play combination. In 1962 they set a record (along with 1B Ernie) for most double plays in a season. His best year with the bat was probably his final year in a Cubs uniform, when Andre hit 12 homers. The Cubs traded him to the Pirates after the season because they had another shortstop in the pipeline ready to take over–Don Kessinger. (Photo: Topps 1964 Baseball Card)

~Johnny Welch 1906 (Cubs 1926-1931)
Welch was a lefthanded pitcher who was on the Cubs for parts of four different seasons, but didn’t get a tremendous amount action in any of them. He appeared in a total of 15 games, 3 of which were starts. After leaving the Cubs he went to the Red Sox and had much more success in Boston. He had two seasons of double-digit wins.

~Hal Leathers 1898 (Cubs 1920)
Leathers was a scrappy little infielder (only 5’8″, 150 lbs) who played in the minor leagues for seven seasons, but did get one brief cup of coffee with the Cubs in 1920. He backed up Charlie Hollocher and Zeb Terry for the last few weeks of the season, and hit .304. Unfortunately, he also committed seven errors in only nine games, and that was it for Hal. He never got another chance in the big leagues.

~Art Jahn 1895 (Cubs 1925)
Art was called up as 29-year-old rookie in the middle of the 1925 season, and was handed the starting left field job. He performed admirably–hitting .301 and fielding the position well. Unfortunately, he had no power at all (zero homers) and little speed (two stolen bases), and the Cubs had lots of options that were more traditionally equipped to play corner outfield. It took Art three more seasons to make it back up to the big leagues, but he did eventually play the Giants and the Phillies.