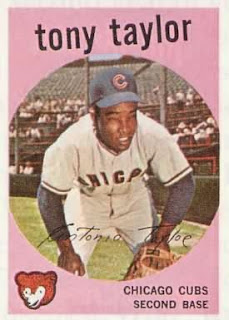 ~Tony Taylor 1935 (Cubs 1958-1960)
Tony was the starting second baseman for the Cubs in 1958 and 1959 but was traded to the Philadelphia Phillies in 1960 for Don Cardwell. The Cubs were clearing out a spot for their brand new acquisition, Don Zimmer. When the Cubs got Zimmer from the Dodgers (for Ron Perranoski), they originally thought Zimmer would play 3B. But Ron Santo emerged, so they moved Zimmer to second base instead. How did these trades work out for the Cubs? Perranoski ended up becoming one of the premier relief pitchers in baseball for the next decade. He pitched in two league championship series, and three World Series, winning two rings with the 1963 and 1965 Dodgers. He also led the league in saves twice, and saved a total 179 games between 1961 and 1971. Tony Taylor, who was only 24 years old at the time of the trade, played another sixteen years in the majors with the Phillies and the Tigers. When he retired after the 1976 season he was the oldest player in baseball (40 years old). Don Zimmer was the manager of the Boston Red Sox at the time. (Photo: Topps 1959 Baseball Card)

~Geoff Zahn 1945 (Cubs 1975-1976)
Zahn was one of two pitchers acquired for Burt Hooton from the Dodgers after the 1974 season. The Cubs gave the lefthander ten starts in 1975 to see what he could do, and while he didn’t have terrible numbers (4.45 ERA), his 2-7 record was pretty bad. He spent most of the 1976 season in the minors. The Cubs were so unimpressed by him they released him January of 1977. Zahn had the last laugh. He went to the American League and pitched in the regular rotation of the Angels and Twins over the next 8 seasons. He averaged nearly 200 innings pitched and 13 wins a seasons.

~Rob Gardner 1944 (Cubs 1967)
Gardner was a lefty reliever who pitched for seven different teams in his eight year big league career. One of those teams was the 1967 Cubs. Gardner appeared in 18 games and posted an ERA of 3.98. The Cubs traded him to the Indians after the season.

~Rafael Soriano 1979 (Cubs 2015)
The Cubs took a flier on the former all-star closer after he released by the Washington Nationals in July of 2015. Turns out the Nationals released him for a reason. In only five innings with the Cubs, Soriano gave up two long balls in crucial situations. The Cubs released him in September.