~Lance Richbourg 1897 (Cubs 1932)
Richbourg (photo) was a backup outfielder on the 1932 pennant winning Cubs. It was the last season of his eight-year big league career (spent mostly in Boston). He was 34 years old at the time, and backed up all three starting outfielders: Kiki Cuyler, Johnny Moore and Riggs Stephenson.

~Coaker Triplett 1911 (Cubs 1938)
Coaker’s real first name was Herman, but everyone referred to him by his middle name. He was on the big league roster as a rookie at the beginning of the 1938 season, but that ’38 Cubs team was loaded with veteran talent, and the backup outfielder didn’t get a lot of playing time. He later reemerged in the big leagues in 1941 with the Cardinals and played through the war years with St. Louis and Philadelphia.

~Buddy Napier 1889 (Cubs 1918)
Buddy pitched in exactly one game in a Cubs uniform for the 1918 pennant winners. He came in relief early in the game and pitched the rest of the game (6.2 innings). Buddy gave up 10 hits and four runs in a Cubs loss. He later got another shot in the big leagues with the Reds. 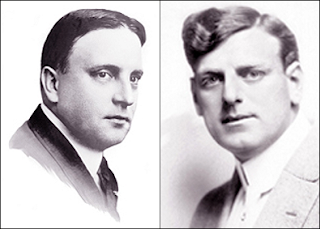 ~George K. Spoor 1872 (Cubs fan)
Spoor was born in Highland Park and ran the only business in Chicago that was more glamorous than the famous Cubs. Not many people realize that Chicago was once the movie capitol of the world. That title lasted exactly one decade (1907-1917), and it was thanks to the movie studio known as Essanay Studios. The studio was located on Argyle Street in the Uptown neighborhood. The name “Essanay” comes from the initials of the studio’s founding partners: George Spoor and Bronco Billy Anderson. (Photo: Spoor on the left, Anderson on the right). At that time there was still quite a bit of open space to film in that neighborhood, and Essanay preferred to shoot outdoors if possible. They also built an indoor studio at that location. On the day the studio was opened (in 1907), the Cubs were in the midst of a magical season, on their way to their first World Series title. As the Cubs built one of the greatest dynasties in baseball history, Essanay was doing the same on Argyle Street. They had the world’s number one box-office star ( Charlie Chaplin), a glamor queen ( Gloria Swanson) and the most famous cowboy star in the world (“Bronco Billy” Anderson). Spoor was the businessman. He had run a news-stand and a film projector company. Two of his employees went on to start the Bell & Howell company, which made movie projectors. Chaplin left Essanay in 1916, which dealt a death blow to the company. A year later, the rest of the movie making world had moved to southern California for better weather (and year-round filming possibilities), and Essanay died a quick and painful death. By 1917, only the plain brick building on Argyle remained as a reminder of this era. Essanay studios was only operating in Chicago for eleven years, but in those years, the Cubs were in the World Series three times, and began playing their games in what is now known as Wrigley Field. It was a critical era in Cubs and Chicago history.