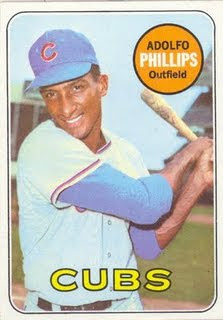 ~Adolfo Phillips 1941 (Cubs 1966-1969)
His nickname was the Panamanian Flash. The Cubs thought they were acquiring their next superstar when they got Panamanian outfielder Adolpho Phillips from the Phillies in 1966. That turned out to be true…but it was the pitcher that was thrown in on the deal, Ferguson Jenkins. Phillips showed flashes of greatness for the Cubs, but he never quite managed to put it together. He had one good season for the Cubs in 1967, when he hit 17 HR, knocked in 70 runs, and stole 24 bases, but manager Leo Durocher never quite thought he could trust him and rode him pretty hard. After a disappointing 1968, and a slow start in 1969, Phillips was traded to the Expos. Fergie later wrote about him: “People did not find out what was the matter with Adolfo until after he had been traded from the Cubs to Montreal in 1969. The following year he had to undergo an operation for a stomach tumor. He also had an ulcer caused by worry, pressure that had been put on him by his teammates and Durocher. Adolfo was extremely sensitive. He had to take tranquilizers to settle his nerves.” Phillips lasted parts of 8 seasons in the big leagues, and ended up hitting 46 of his 59 career home runs for the Cubs.

~Paul Noce 1959 (Cubs 1987)
Noce was a middle infielder who was called into service in 1987 mainly because of an injury to shortstop Shawon Dunston. Noce got the most extensive playing time of his big league career (his only season with the Cubs), hitting .228 in nearly 200 plate appearances. He spent the next few seasons in the minors before reemerging briefly with the Reds in 1991.

~Tony Kaufmann 1900 (Cubs 1920-1927)
Kaufmann was a local Chicago boy who made it to the big leagues with his hometown Cubs at the young age of 20. After a few years of bullpen work and spot starting, Tony claimed a spot in the rotation in 1923 and began a string of three excellent seasons. He won 14, 16, and 13 games those three years–pitching as the third starter in a rotation that also included an aging Grover Cleveland Alexander (he was 14 years older than Tony). Kaufmann was traded to the Phillies in 1927, and finished his career (in 1935) with the St. Louis Cardinals. After his playing days were over, Tony relocated back to his hometown. He passed away in Elgin in 1982.

~Sammy Strang 1876 (Orphans 1900, 1902)
Strang had one of the best nicknames of all-time. They called him the Dixie Thrush. The native of Tennessee was a backup middle infielder for the 1900 Cubs (then known as the Orphans). He jumped to the upstart American league in 1902 (with the White Sox), although he did finish up that season with the Cubs. His best years came with the Giants, including the 1906 season when he led baseball with a .423 on base percentage.

~Jittery Joe Berry 1904 (Cubs 1942)
Jittery Joe was a fidgety righthander with a herky-jerky delivery who spent 18 years in the minors before debuting with the Cubs as a 37-year-old rookie. Jittery Joe didn’t do much for the Cubs (2 innings pitched, gave up 7 hits), so they traded him to the A’s, where he had two good seasons during the war years of 1944 and 1945 (as a 39 and 40 year old). He was a very thin man, tipping the scales at no more than 135 pounds. How thin was he? He was once blown off the mound by a gust of wind, which caused him to balk, and cost his team the game.

~Tyler Chatwood 1990– (Cubs 2018-present)
Chatwood was signed before the 2018 season to be the Cubs fifth starter. Although he managed to find a way to pitch out of trouble at first, his staggering walk totals eventually caught up to him. In 103 innings pitched, he walked 95 men. By the end of the season he was no longer in the rotation. Chatwood regained his standing with the Cubs in 2019 by performing admirably out of the bullpen. His control improved, and manager Joe Maddon trusted him in several crucial situations.