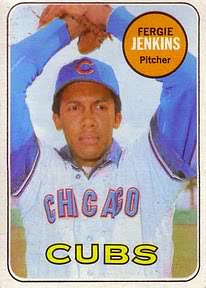 ~Ferguson Jenkins 1942 (Cubs 1966-1973, 1982-1983)
Fergie is one of the top five pitchers to ever wear a Chicago Cubs uniform. He led the league in wins twice, fewest walks per 9 innings five times, and complete games nine times. His streak of six straight seasons with 20 or more wins (1967–1972) is the longest streak in the major leagues since Warren Spahn did it between 1956 and 1961. And he did it despite not having the best of luck. You’ve heard the expression “it’s better to be lucky than good”, right? Well in 1968, Fergie Jenkins was good…but he certainly wasn’t lucky. He won 20 games, but he also lost 15 games that year. It was the way he lost the games that were unlucky. Five times that season he lost 1-0 games. 5 times! On May 14, Fergie and the Cubs lost to Don Drysdale and the Dodgers. On May 19, Fergie and the Cubs lost to Gaylord Perry and the Giants. On June 20, Fergie and the Cubs lost to Bob Gibson and the Cardinals. Two Mets pitchers did the same thing–Dick Selma (July 11) and Jim McAndrew (Sept 11), and four other pitchers also shut out the Cubs on days Fergie was on the mound (Steve Blass, Jerry Koosman, Tony Cloninger, and Ken Johnson). Not many pitchers in baseball history can say that they pitched in nine different games in one season that their own team was shut out. And 1968 wasn’t the only year he had that kind of luck. In his Hall of Fame career, Fergie Jenkins lost 45 games in which his team didn’t score a run. 45! No wonder he was voted into the Hall of Fame despite not reaching that magical win total of 300. He had 284 career wins, but if the Cubs came through for him with a run in only half of his 1-0 losses, he would have easily surpassed 300 wins. Fergie’s secret was his incredible control. There are only four pitchers in ML history with more than 3000 strikeouts and less than a thousand walks. Greg Maddux (who also wore #31 with the Cubs), Curt Schilling, Pedro Martinez, and Ferguson Jenkins. He richly deserves his status as a Hall of Famer. (Photo: Topps 1969 Baseball Card)

~Steve Wilson 1964 (Cubs 1989-1991)
Wilson was acquired along with Mitch Williams in the trade that sent Rafael Palmeiro and Jamie Moyer to the Rangers. During the Cubs division winning season of 1989, he was a key arm in the bullpen. The lefty logged 54 appearances, winning 6 games and saving 2 more. On the other hand, he had a bit of a rough go in the playoffs that year. He only pitched three innings, and he gave up two homers. In 1991 the Cubs traded him to the Dodgers.

~Jeff Robinson 1960 (Cubs 1992)
Jeff pitched nine years in the big leagues, mostly as a reliever, although he did occasionally start. His final season was with the Cubs. He won four games and saved another in 49 appearances. Robinson also pitched for the Giants, Pirates, Yankees, and Angels.

~Jon Perlman 1956 (Cubs 1985)
Perlman made his big league debut for the Cubs in their injury ravaged year of 1985. He didn’t fare well. In six outings he allowed more than two runners an inning and posted an 11.42 ERA. He was 28 years old at the time. Perlman got a few more cups of coffee in his 30s with the Indians and the Giants.

~J.C. Martin 1936 (Cubs 1970-1972)
The veteran catcher was brought aboard as Randy Hundley’s backup after his previous team (the 1969 Mets) won the World Series. Martin was known as a good handler of pitchers and a good defensive backstop, but he couldn’t hit. His lifetime batting average over 14 big league seasons was only .222. 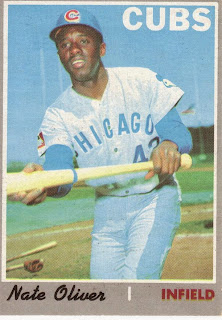 ~Nate Oliver 1940 (Cubs 1969)
He was a diminutive infielder on a Dodgers team that recently had another diminutive infielder nicknamed Pee Wee (Reese), and Nate Oliver became known as Pee Wee too. In 1964 he was the starting second baseman for the Dodgers, but for the rest of his career Nate Oliver was strictly a role player. He did play for the Dodgers team that won the 1965 World Series and the 1966 team that lost the series to the Orioles, but Nate only got in one game. He was standing on second base as a pinch runner when Lou Johnson flied out to the end the series. The Cubs got Pee Wee in a trade with the New York Yankees early in their memorable 1969 season (in exchange for future Cubs manager Lee Elia). Oliver didn’t play too much, only 49 at bats in 44 games, but he bonded well with his teammates and became a fan favorite. Along with reserve outfielder Willie Smith, he became part of the singing Cubs. Willie and Nate sang the song “Pennant Feeling” (a parody of the Righteous Brothers song “You’ve Lost That Lovin’ Feeling”), and then along with reserve catcher Gene Oliver sang “Hey Hey Holy Mackeral.” But as the Cubs faded late in 1969, Nate Oliver’s Cubs career faded into the sunset. His final big league game was in a Cubs uniform; September 27, 1969. After his playing career was over Nate transitioned into coaching, as an infield and batting instructor, and also manager, in the farm systems of the Angels, Cubs and White Sox. (Photo: Topps 1970 Baseball Card)

~Bob Wright 1891 (Cubs 1915)
If you want to go back in time to see Bob Wright pitch, set your wayback machine to either September 21st or September 24 in 1915. In his big league debut on the 21st, Wright came to pitch the final inning for Hippo Vaughn at West Side Grounds in a 5-4 loss to the Giants. He only gave up one hit. In his final big league game on the 24th, he pitched the final three innings for Zip Zabel of a 6-0 loss the Phillies. He got lit up in that one. Although he was only 23 years old, Bob wasn’t asked to stay with the team when they moved across town the following season–for their first season at Wrigley Field. Bob’s greatest accomplishment, however, didn’t happen on the baseball field. When he died in 1993, he was 101 years old.

~Bill Everitt 1868 (Colts/Orphans 1895-1900)
They called him “Wild Bill” and he played third base for his first few years with the Cubs (then known as the Colts) until switching over to first base for his final three years with the team. Wild Bill was an excellent hitter (.317 lifetime average) with excellent speed (179 stolen bases in six years). In 1901 he jumped to the upstart American League, and finished his career with Washington.

~Jack “Brakeman” Taylor 1874 (Orphans 1898-1903/Cubs 1906-1907)
He was known as the Brakeman by his teammates. The brakeman was the person who would walk the length of a train atop the cars while the train was in motion and turn the brake wheel on each car to apply the train’s brakes. That’s the role Brakeman Jack Taylor had on the Cubs pitching staff early in his career—he would put the brakes on Cubs losing streaks. Taylor is most remembered for a record that will never be broken. From June 20, 1901 until August 9, 1906, The Brakeman threw 187 consecutive complete games, along with 15 additional relief appearances without being removed from a game—giving him 202 straight appearances without being removed. This stretch included occasions where he pitched both ends of a double header, an 18 inning game, and two 14 inning games. The Cubs traded him to the Cardinals for one of the greatest Cubs players of all-time, Mordecai Brown, because Cubs owner James Hart was convinced that Taylor had fixed an exhibition game against the White Sox. Although Taylor came back to the Cubs in 1906 (under a new owner), and pitched for the winningest team of all-time (the 1906 Cubs), and the 1907 champs, they never really trusted him again and wouldn’t let him pitch in either World Series—just in case. He was 34 when he retired just before the Cubs last World Series Championship season. 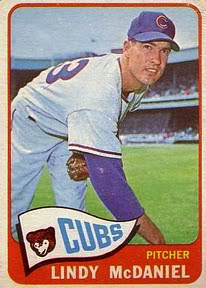 ~Lindy McDaniel 1935 (Cubs 1962-1965)
The Cubs picked up Lindy McDaniel from the Cardinals in 1962, and he had a few very good years for the team, despite the fact that the Cubs were awful while he was there. In 1963 he even led the league in saves. That same year he might have had his best day in baseball. On June 6, 1963, he came in to save the game. The bases were loaded in the 10th inning of a tied game, and there was one out. McDaniel promptly picked Willie Mays off second base for the second out. Then he retired Ed Bailey for the third. Then, in the bottom of the tenth inning he came up to bat, and promptly hit a homer to win the game. That game obviously made an impression on the Giants, because they traded for McDaniel just a few years later. In return the Cubs got two prospects that became key members of their late 60s contenders; catcher Randy Hundley and pitcher Bill Hands.