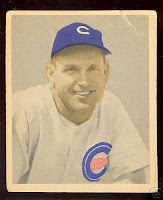 ~Bill Nicholson 1914 (Cubs 1939-1948)
Though he is known to history by his nickname “Swish”, Cubs fans didn’t call him that, Brooklyn Dodgers fans did. The big left-handed hitter had a routine when he came up to bat. He would swing his bat across the plate several times after stepping in to face an opposing pitcher. Obnoxious Dodger fans would yell, “Swish, swish, swish,” in unison with each of his practice swings. He may have struck out a lot, but he was truly a feared slugger. One time he was even intentionally walked with the bases loaded. Swish led the league in homers in ’43 and ’44. Nicholson was also part of the ’45 pennant team, but his power started to go that year. He wouldn’t know it for a few more years, but he was losing his eyesight because he was diabetic. It’s ironic that he starred during the war years, because his life long dream was to serve as a naval officer. Nicholson was crushed when he was rejected for service because he was color-blind.

~Gene Hiser 1948 (Cubs 1971-1975)
Hiser was a first round pick of the Cubs in 1970, and quickly made it up to the big leagues. But he never really broke through. He served mainly as a pinch hitter and extra outfielder for a few seasons, finishing up with a career batting average of .202.

~Andy Varga 1930 (Cubs 1950-1951)
Andy was a Chicago boy (Lane Tech High School) who made it to the big leagues at the tender age of 19. The lefthander only got into a few games over two September call ups with the Cubs, and had command issues. By the time he turned 23, he was out of baseball.

~Fred Toney 1888 (Cubs 1911-1913)
Toney got his big league start with the Cubs when they played at West Side Grounds, but didn’t really blossom as a pitcher until he went to the Reds. He was a 24-game winner for the Reds in 1917, and pitched what may have been the greatest game in big league history. Toney faced off against Cubs pitcher Hippo Vaughn in the famous double no-hitter. Toney’s Reds eventually beat Vaughn’s Cubs in extra innings.

~Art Wilson 1885 (Cubs 1916-1917)
Wilson was a backup catcher for 14 big league seasons, including the first year of Wrigley Field (as a member of the Chicago Whales), and the first season the Cubs played at Wrigley Field (in 1916). He was also a member of three pennant winning New York Giants teams, all of which lost the World Series.