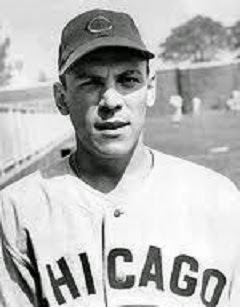 ~Rube Novotney 1924–1987 (Cubs 1949)
Novotney was a University of Illinois product who got one short cup of coffee with the Cubs in 1949. He was a backup catcher who appeared in 22 games. He hit .269 in his limited appearances. Rube also played nine seasons in the minor leagues.

~Tony Jacobs 1925–1980 (Cubs 1948)
Jacobs made only two appearances in the big leagues, and they came almost seven years apart. His debut came with the Cubs in September of 1948. He pitched two innings and gave up three hits, including a home run to future Cub Gene Hermanski, in a 8-1 loss to the Dodgers in Brooklyn. He did manage to retire two Hall of Famers that day: Pee Wee Reese (strikeout) and Jackie Robinson (groundout). Seven seasons later he made the Opening Day roster of the Cardinals and pitched against the Cubs. This time he was hit pretty hard. Ernie Banks and Randy Jackson both had two hits. One of Jackson’s hits was a homer. That was the last Tony Jacobs ever saw of big league baseball. He pitched twelve seasons in the minors.

~Tim Federowicz 1987– (Cubs 2016)
Federowicz played in parts of four seasons for the Dodgers before joining the Cubs. The catcher got a brief taste of a World Championship season when he was called up due to an injury. He played in 17 games and hit .194. After the season ended, Federowicz was granted free agency.