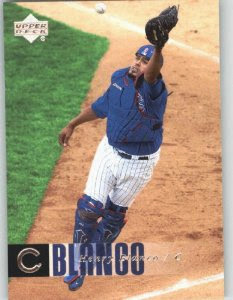 ~Henry Blanco 1971– (Cubs 2005-2008)
Affectionately called Hank White by the Cubs broadcasters (Blanco means White), Blanco was a backup catcher for the Cubs for two of their playoff years (2007-2008). The veteran served as a stabilizing force for the pitching staff and also provided a little pop off the bench. He hit 15 homers in his time with the Cubs. Blanco was mentioned by his Braves/Cubs teammate Greg Maddux in his Hall of Fame induction speech in 2014. In 2015, the Cubs added him to their coaching staff. (Photo: 2006 Upper Deck Baseball Card)

~Logan Watkins 1989– (Cubs 2013-2014)
Logan got his first taste of the big leagues at the end of the 2013 season. The infielder hit .211 with one extra base hit in 27 games. He also got into a handful of games in 2014, when the Cubs suffered injuries, illnesses, or personal issues. Those were his only two shots at the big leagues, however. Watkins played nine years in the minors.

~Anthony Recker 1983– (Cubs 2012)
The Cubs acquired the catcher from Oakland at the end of 2012, but released him after the season. He only appeared in nine games as a Cub. Recker caught on with the Mets the following year, and has also played for Atlanta.

~Dave Cole 1930–2011 (Cubs 1954)
Cole was a right-handed starting pitcher the Cubs acquired from the Braves for Roy Smalley. He started 14 games for the 1954 Cubs, but was hit pretty hard. His 5.36 ERA was very high for that era. He also walked almost twice as many men as he struck out (62/37) — a recipe for disaster. The Cubs sold him to the Phillies the following spring training.

~Ensign Cottrell 1888–1947 (Cubs 1912)
Ensign wasn’t his rank in the Navy, it was his given first name. The Hoosick (NY) native pitched one game for the 1912 Cubs. That team still had eight players from the last World Series champion, but several of them were near the end of the line, including Frank Chance. Cottrell had a strange big league career. He pitched only one game for the Pirates, two for the A’s, one for the Braves (during their miracle year), and seven for the Yankees. 12 games for five different teams in 5 big league seasons.