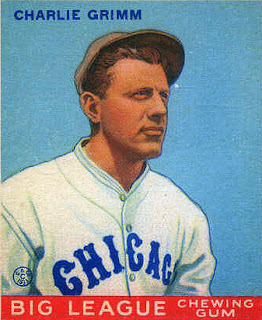 ~Charlie Grimm 1898–1983 (Cubs player 1925-1936, Cubs manager 1932-1938, 1944-1949, 1960)
They called Charlie Grimm “Jolly Cholly” because he was a fun-loving guy who always seemed to be happy during his 20 seasons as a player. He played the banjo to loosen up the team on long train rides, and was a constant chatterbox on the field. He was so beloved by his teammates that Phillip K. Wrigley named him to manage the team while he was still a player (Charlie played first base). His laidback and tolerant approach seemed to coax great performances from mediocre teammates and legendary performances from great players. Taking over the team from the despised disciplinarian Rogers Hornsby in 1932, Charlie led the team to the pennant that season. He was also the manager of the 1935 pennant winners and the last Chicago team to win the National League — the 1945 Cubs. After he stepped down as a manager, he remained in the Cubs front office in one capacity or another for the rest of his life. He was such an important part of Cubs lore that his wife was allowed to spread his ashes in Wrigley when he died in 1983. (Photo: 1933 Goudy Baseball Card)

~Dode Paskert 1881–1959 (Cubs 1918-1920)
His real name was George Henry Paskert, but everyone called him Dode. No one knows for sure the origin of Paskert’s nickname, but more than likely it was a dig at his perceived low intelligence. The English Dialect Dictionary, published in 1900, describes a dode as a “slow [witted] person,” and a scattering of press accounts confirm that Paskert was considered stupid. He was a pretty good player for the Phillies when the Cubs acquired him in 1918, but he came at a high price. Cy Williams, who they traded for him, became a big star for Philadelphia — one of the best players of the era (he won three home run titles for Philly). Dode Paskert, on the other hand, didn’t do much. He did start in center field and had a good year in 1918 — when the Cubs made it to the World Series. (Although he only hit .190 in that series.) But Dode didn’t have much left in the tank after that. He retired after the 1920 season.

~Randy Wells 1982– (Cubs 2008-2012)
Wells had a tremendous rookie season with the Cubs in 2009, winning 12 games and posting a sparkling 3.05 ERA. He remained in the starting rotation the following season, although his win total slipped to 8, and his ERA climbed to 4.26. Wells had a few flashes the next two years, but never really reclaimed the magic from his rookie year. The Cubs released him at the end of 2012, and he retired in April of 2013, while with the Texas Rangers. (He plays a part in one of my favorite days ever at Wrigley Field)

~Shane Andrews 1971– (Cubs 1999-2000)
Shane was picked up by the Cubs after the Expos released him in September of 1999. By Opening Day of 2000 (in Tokyo), he was the team’s starting third baseman. It didn’t work out. Before the season was over, he was sharing the job with Willie Greene. While both hitters had pop (24 combined homers), they just couldn’t put the ball in play enough. Andrews hit .229 and was released after the season.

~Dick LeMay 1938– (Cubs 1963)
The lefty reliever pitched in nine games for the Cubs and was hit hard. In just over 15 innings pitched, he gave up 26 hits, and never pitched in the big leagues again. LeMay won over a hundred games in his minor league career. He later managed for the Cubs in the minors.

~Johnny Pramesa 1925–1996 (Cubs 1952)
The Cubs sent Smoky Burgess to the Reds to acquire Pramesa in a catcher-for-catcher swap. Burgess became an All-Star and played in the big leagues for 16 more seasons. Johnny backed up starting catcher Toby Atwell in 1952, and only appeared in 22 games for the Cubs. It was his last year in the big leagues.

~Cliff Aberson 1921–1973 (Cubs 1947-1949)
The local Chicago boy (Senn High School) played three seasons for the Cubs after serving in the military during the war and playing a season of pro football for the Green Bay Packers as a tailback and defensive back. He was a left fielder for the Cubs. In parts of three seasons, he hit five homers. His nickname was Kif.

~Jeff Cross 1918–1997 (Cubs 1948)
Cross played shortstop and third base in sixteen games. It was his last year in the big leagues. His most productive baseball years were spent serving the country in the United States Navy during the war. Jeff kept his fingers in the game, though. In 1950 he coached a team to the Little League World Series. 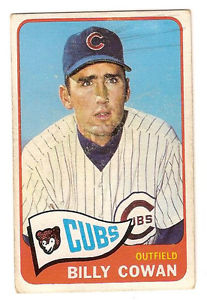 ~Billy Cowan 1938– (Cubs 1963-1964)
The mid-60s Cubs had several players who whiffed more than they made contact. In 1964, Billy Cowan was the Cubs regular center fielder. Cowan had some pop in his bat — he hit 19 homers that year — but he also had a habit of swinging and missing. In more than 400 at-bats that season, Cowan struck out 128 times while managing to get only 120 hits. He also led all National League center fielders in errors that season. The Cubs traded him to the Mets for George Altman before the 1965 season. (Photo: 1965 Topps Baseball Card)