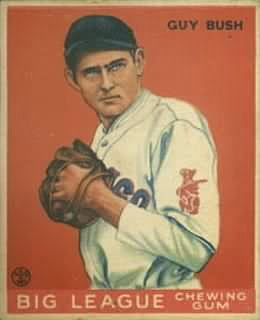 ~Guy Bush 1901–1985 (Cubs 1923-1934)
The Mississippi Mudcat got his nickname because he came from Mississippi and had a very strange delivery. Bush won 150+ games for the Cubs, as a starter and reliever (he led the league in relief wins 4 times). Some of those were key games in Cubs history. On May 4, 1927 he pitched 18 innings in one game, when the Cubs beat the Braves 7-2. He started and won Game 3 of the 1929 World Series against the A’s, giving up only one run. He also pitched Game 1 of the 1932 series against the Yankees, but this time the results weren’t quite as good. He was shelled for eight earned runs in less than six innings. One last notation on Bush’s career highlights: He was the last pitcher to give up a home run to Babe Ruth. He did that as a member of the Pirates in 1935. (Photo: 1933 Goudy Baseball Card)

~Mark Bellhorn 1974– (Cubs 2002-2003)
Bellhorn was a utility man for the Cubs playoff team of 2003, and was lucky enough to be part of ending a couple of curses. Unfortunately, it wasn’t with the Cubs. In 2004, he was a key member of the Red Sox team that won the first World Series for Boston in 86 years. That team had three ex-Cubs, which also helped disprove the ridiculous ex-Cubs curse theory of Mike Royko. (The 2001 Diamondbacks team was the first team to disprove it.)

~Lonny Frey 1910–2009 (Cubs 1937, 1947)
Frey was a second baseman/shortstop who played for the Cubs in two different seasons ten years apart. Between those two seasons he was a three time All-Star and a World Series champ with the Reds. After he left the Cubs the second time he won another World Series…as a member of the New York Yankees. In 20 World Series at-bats, Lonny got zero hits. His nickname was Junior.

~Jerry White 1952– (Cubs 1978)
White was an excellent outfielder for the Expos. The Cubs traded Woody Fryman to acquire him during the 1978 season, and then traded him back to the Expos after the season was over. In eleven big league seasons he stole nearly 150 bases.

~Al Montreuil 1943–2008 (Cubs 1972)
The Louisiana native was a September call-up for the Cubs in 1972. He was 29 years old at the time, and it was his only chance at the big leagues. The second baseman got one hit in eleven at-bats. He played twelve seasons in the minors. After his playing career he retired to his native Louisiana and became a realtor.

~Danny Murphy 1942– (Cubs 1960-1962)
Murphy came up with the Cubs as an outfielder and was a little overmatched as a batter. He hit only .177. So, he went back down to the minors and became a pitcher. At the end of the 60s, he made it back up to the big leagues as a pitcher with the Chicago White Sox.

~Dave Dowling 1942– (Cubs 1966)
Dowling pitched in one game for the Cubs. He started the game on September 22nd of that year and got a complete game victory. He gave up two runs in the first to the Reds, and shut them out the rest of the way. Among the Reds in the lineup that day: Pete Rose. Rose went 1-4 with a single. Among the Cubs who played behind Dowling that day: Hall of Famers Billy Williams, Ron Santo, and Ernie Banks. They combined to score four runs and provide the margin of victory.

~Cole Liniak 1976– (Cubs 1999-2000)
Liniak was a highly regarded prospect with the Red Sox and Cubs who never quite made it in the big leagues. He played twelve seasons in the minors but only got into fifteen games in the bigs, all with the Cubs. He was a third baseman. The Cubs acquired him in the trade that sent Rod Beck to Boston.

~Roy Leslie 1894–1972 (Cubs 1917)
Leslie was a first baseman who got limited playing opportunities backing up Fred Merkle. He later got a cup of coffee with the 1919 Cardinals and 1922 Phillies, but Roy was mostly a career minor leaguer. He had over 5000 plate appearances in 17 minor league seasons.

~Fred Andrus 1850–1937 (White Stockings 1876, 1884)
Andrus was 15 years old when the Civil War ended, and played for the Cubs (then known as the White Stockings) in their first season in the National League when they still played at 23rd Street Grounds. He pitched and played outfield, but not often; a grand total of nine games. Those two years (eight years apart) were his only big league seasons. He later worked as the treasurer for his boss’ (Al Spalding) sporting goods company.

~Red Downs 1883–1939 (Cubs 1912)
He was already well-known to the Cubs when he joined the team in 1912. Downs had been on the Detroit Tigers team the Cubs beat in both the 1907 and 1908 World Series. Red was a pretty slick fielder, so the Cubs brought him in to back up a few other slick fielders, future Hall of Famers Johnny Evers and Joe Tinker. But after the 1912 season was over, so was his major league career. He played six more seasons in the minor leagues out west, but never quite made it back to the show. After he retired Red became a hero to the old-timers because he founded the Professional Ballplayers of America, which was an organization dedicated to helping retired ballplayers that had fallen on hard times, either through illness or poverty or both. He ran the organization himself until 1925. But when the Great Depression hit, Red became one of those needy ex-ballplayers himself. He started drinking heavily, couldn’t find a job, and then he became desperate. In 1932, Red and a friend, armed with pistols, entered the jewelry store in Los Angeles’ swanky Biltmore Hotel and made off with $52,000 in merchandise. It didn’t take the police too long to find him. A week later he was captured and arrested. The former major leaguer received a sentence of 5 years-to-life for that armed robbery. Downs was a model citizen in prison, organizing the prison baseball team, and because he was promised a job by his uncle in Iowa, he was released on probation three and a half years later. Unfortunately, after he was released, Red slowly drank himself to death. He died of cirrhosis of the liver just three years later.