~Ray Burris 1950– (Cubs 1973-1979)
Ray anchored the Cubs rotation in the mid-70s, twice winning 15 games in a season (’75 & ’76). Unfortunately for Ray, expectations were very high for him. He arrived on the Cubs just as Fergie Jenkins was departing, and the team hoped that Burris could step into that role. Turns out there was only one Fergie. The Cubs traded Burris to the Yankees in 1979 for reliever Dick Tidrow. Ray had a very respectable 15-year big league career. He won over a hundred games for the Cubs, Yankees, Mets, Expos, A’s, Brewers, and Cardinals. In 1981 he pitched in the NLCS for the Montreal Expos. He shut out the Dodgers in Game 2 of that series, before losing a pitcher’s duel to Fernando Valenzuela in the deciding Game 5. Burris is currently a pitching coach in the Phillies organization. (Photo: Topps 1975 Baseball Card)

~Darrin Jackson 1963– (Cubs 1985-1989)
Jackson is well known to White Sox fans as their radio announcer (“DJ”), but he got his big league start playing outfield for the Chicago Cubs. DJ was one of their top prospects, a second round draft choice, who played in the big leagues at ripe old age of 21. In 1988 he had his best season with the Cubs, playing in 100 games and hitting .266 with 6 homers and 20 RBI. But in the middle of the division-winning season of 1989, the Cubs traded him to the Padres (along with Calvin Schiraldi) for Marvell Wynne and Luis Salazar. DJ went on to play 12 seasons in the big leagues for the Padres, Mets, White Sox, Twins, and Brewers. He was having a career season with the 1994 White Sox (hitting .312) when baseball went on strike.

~Gary Scott 1968– (Cubs 1991-1992)
Gary was the Opening Day third baseman in 1991 as a 22-year-old rookie. The second round draft choice was billed simply as the best Cubs third baseman since Ron Santo. It didn’t turn out that way. After less than a hundred at-bats, it was clear that Scott couldn’t hit big league pitching. He hit .165. They gave him another shot in 1992, and Gary responded with a .156 average. After the season the Cubs traded him to Miami for left-handed starting pitcher Greg Hibbard. Hibbard won 15 games for the Cubs. Scott never played in the majors again.

~Frank Ernaga 1930–2018 (Cubs 1957-1958)
Ernaga did a good job as a pinch hitter for the Cubs in 1957. In his very first game he hit a homer and a triple against Warren Spahn. For the season Frank hit .314 with seven extra base hits (out of 11 hits) and drove in seven runs. The following year he couldn’t repeat that success and was sent back down to the minors where he finished his career.

~Oscar Fuhr 1893–1975 (Cubs 1921)
Fuhr made the Cubs out of spring training in 1921. The lefty looked like he had the goods. The Sporting News thought he would be the next Grover Cleveland Alexander. He wasn’t. He pitched exactly one game for the Cubs and was rocked. He gave up eleven hits and nine runs in only four innings, and was sent to the minors after the game. Fuhr later pitched for the Red Sox (with similar results) 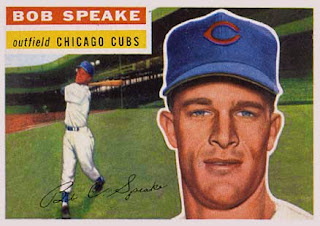 ~Bob Speake 1930– (Cubs 1955,1957)
His real name was Robert Speake, and he went by Bob, but his nickname was Spook. Spook was an outfielder/first baseman for the Cubs during the ’55 and ’57 seasons, and had decent pop in his bat (12 and 16 home runs), but his average was terrible (.218 and .232). The Cubs traded him to the Giants after the ’57 season for Bobby Thompson, and Speake drifted away. He only hit three more homers in his career and was out of baseball after the ’59 season.(Photo: Topps 1956 Baseball Card)