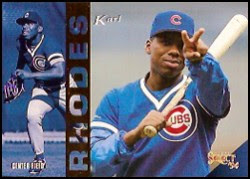 ~Tuffy Rhodes 1968– (Cubs 1993-1995)
In 1994, the Cubs had a memorable home opener against the New York Mets. A little-known player named Tuffy Rhodes hit three homers that day to power the Cubs to a victory. Cubs fans had delusions of grandeur after that game, but Tuffy hit only five more homers the rest of the season. 1994 was also the year that Major League Baseball canceled the World Series because the players were on strike. Not that the Cubs would have had a shot at winning it. When the league shut it down for the year in August, the Cubs were 15 games under .500 and 16 1/2 games out of first place. Tuffy left the Cubs the following season. He eventually played in Japan, where he finally realized his full potential. In 2001 he tied the Japanese League record for most home runs in a season, a record held by the immortal Sadaharu Oh since 1964. Tuffy easily could have broken the record, but after he tied Oh, Japanese pitchers intentionally walked him the rest of the year.

~Ismael Valdes 1973– (Cubs 2000)
He was known as “The Rocket” like another famous Ismael, football’s Rocket Ismael. The Cubs acquired the former 15-game winner along with Eric Young, and immediately placed him in the starting rotation. Unfortunately for the Cubs, Valdez developed blister problems and had a hard time staying healthy. He won a grand total of two games in Chicago. Before the season was over, they traded him back to the Dodgers. He later pitched for the Angels, Rangers, Mariners, Padres, and Marlins. Valdez won 104 big league games, but he also lost 105. He does, however, have his name in the Cubs record books. Ismael shares the record for most homers allowed in one game. He served up five.

~Tim Collins 1989– (Cubs 2019)
The lefty reliever had recovered from two Tommy John surgeries in recent seasons when the Cubs gave him a chance. In nine games with the big league club, he pitched admirably out of the bullpen (3.12 ERA), but when the Cubs acquired Derek Holland at the trade deadline, it marked the end of Collins’ time in Chicago. He previously pitched for the Royals and the Nationals.

~Jim Bullinger 1965– (Cubs 1992-1996)
On the first pitch of his first big league at-bat, Bullinger hit a home run, an incredible accomplishment for any player, let alone a pitcher. Jim was in and out of the Cubs rotation for a few seasons. His career year came in 1995, when he won 12 games with an ERA of 4.14. He finished his career pitching for the Expos and Mariners.

~Vern Fear 1924–1976 (Cubs 1952)
Fear was blessed with one of the great names in baseball history. Unfortunately, his pitching did not strike fear in the heart of big league hitters. He pitched in four games for the Cubs, the entire extent of his big league career. In his first appearance with the Cubs he faced four Dodgers: Duke Snider, Andy Pafko, Roy Campanella, and Gil Hodges. He gave up three singles and a homer (to Snider) and was pulled out of the game with an ERA of infinity.

~Whitey Platt 1920–1970 (Cubs 1942-1943)
When your real first name is Mizell, you’re bound to get a nickname. Platt’s blonde hair gave him that nickname. He played for the US National Team under former Cub Les Mann, who was trying to make baseball an international sport. Whitey later was an outfielder who got a little bit of playing time with the Cubs in ’42 and ’43 before going into the Navy. When the war ended he played for the White Sox and St. Louis Browns. His best season was 1948, when he was the starting left fielder for the Browns and knocked in 82 runs. Platt was only 49 years old when he passed away in 1970.

~Jim Mosolf 1905–1979 (Cubs 1933)
Mosolf was a backup outfielder for the 1933 Cubs — a team that featured the likes of KiKi Cuyler, Babe Herman, and Riggs Stephenson. He was a pretty good pinch hitter, hitting .268 with a homer and nine RBI. It was his last shot at the big leagues. He previously had played for Pittsburgh.

~Johnny Bates 1882–1949 (Cubs 1914)
Johnny had over a thousand big league hits, including a homer in his first big league at-bat (for Boston), but only one of those hits came in a Cubs uniform. The outfielder only played a month or so with the Cubs. Earlier in his career, Bates had a knack for getting on base. He had four different seasons with an on-base percentage above .400.

~Frank Isbell 1875–1941 (Orphans 1898)
He was known as the Bald Eagle. Isbell got his start with the Cubs (then known as the Orphans), but his best years were with the White Sox. He was the starting second baseman on the 1906 White Sox team that beat the Cubs in the World Series. The Bald Eagle could fly. He stole over 250 bases in his career, only three of which were for the Cubs.

~Jesse Chavez 1983– (Cubs 2018)
The Cubs acquired the well-traveled Chavez from the Rangers just before the trade deadline in July, and Jesse became one of the most important relievers for the team down the stretch. He appeared in 32 games and posted an incredible 1.15 ERA. The Cubs were his ninth team in the big leagues (Pirates, Braves, Royals, Blue Jays, A’s, Dodgers, Angels, Rangers). 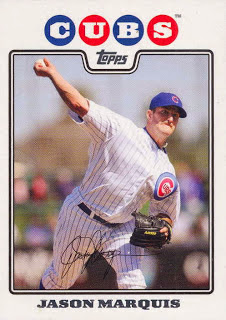 ~Jason Marquis 1978– (Cubs 2007-2008)
For the first nine seasons of his big league career, Jason Marquis’ teams were in the playoffs every year. The streak began in 2001 in his rookie season in Atlanta, and it ended when his 2010 Washington Nationals team didn’t make the playoffs. He won the World Series with the Cardinals and made the All-Star team with the Rockies. His time with the Cubs was not exceptional, but he took the ball every five days during his two playoff seasons with the Cubs, and pitched more than 350 innings. He was also a strong hitter. He hit three homers and knocked in 14 runs during his Cubs tenure. Jason’s last appearance with the Cubs was in the 2008 NLDS. He pitched one inning and gave up a homer to Dodgers catcher Russell Martin. In all, Marquis pitched for nine different teams in a solid 15-year big league career. (Photo: 2008 Topps Baseball Card)