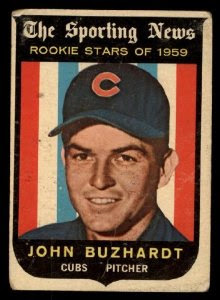 ~John Buzhardt 1936–2008 (Cubs 1958-1959)
Buzhardt burst onto the scene in September of 1958 and immediately made his presence known. In his first two big league starts he beat Sandy Koufax and Don Drysdale. The following year he tossed a one-hitter for the Cubs before developing elbow problems. The Cubs traded him to the Phillies (along with Alvin Dark and Jim Woods) for future Hall of Famer Richie Ashburn. Ashburn had a few more seasons in the tank. Buzhardt had a decade. He pitched for the Phillies, White Sox, Orioles, and Astros before hanging up his spikes following the 1968 season. He never quite lived up to his early promise. His final record was 25 games under .500, although he had a very respectable 3.66 lifetime ERA. (Photo: Topps 1959 Baseball Card)

~Thomas Neal 1987– (Cubs 2013)
Neal was an outfielder in the New York Yankees minor league system that had been released when the Cubs took a chance on him at the end of the 2013 season. He got four chances to hit for the Cubs, and got zero hits. The Cubs released him after the season. He has since become a hitting coach in the San Francisco Giants farm system.

~Bill Landrum 1957– (Cubs 1988)
The Cubs got Landrum from Cincinnati in a trade for infielder Luis Quinones. He had been a pretty effective reliever for the Reds, but didn’t do much in a Cubs uniform. They let him go after the season, and Landrum signed with the Pirates. The Pirates made him their closer and he saved 56 games for them over the next three years.

~Victor Caratini 1993– (Cubs 2017-present)
The Cubs acquired Victor at the trade deadline in 2014 for Emilio Bonafacio and James Russell. The switch-hitting catcher was brought up to the big league club in 2017 when Miguel Montero was released and became a reliable bat off the bench during the stretch run. During the 2018 season Victor served as the main backup to Willson Contreras, but he really came into his in 2019. Victor filled in admirably for the injured Contreras and Anthony Rizzo and slugged eleven homers in just 266 at bats.