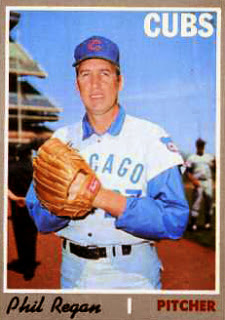 ~Phil Regan 1937– (Cubs 1968-1972)
Phil Regan wasn’t known as the vulture until he was converted to a reliever by the Dodgers in 1966. He was given his nickname by Sandy Koufax for picking up (cheap) wins in short relief. The vulture went 14-1 that year with a 1.62 ERA, with a National League leading 21 saves. That year he was named the Comeback Player of the Year and the Fireman of the Year. Regan became a Cub in April of 1968. They got Regan and Jim Hickman in exchange for Jim Ellis and Ted Savage, neither of whom ever did much for the Dodgers, while Hickman had the best seasons of his ML career as a Cub, and Regan led the league with 12 relief wins and 25 saves in 1968. The vulture was widely suspected of doctoring up the ball. In 1968 an umpire punished him for it, but Regan appealed to the league office, and the umpire was told that he shouldn’t have kicked him out of the game without solid evidence. That led umpires and opposing managers to have him searched countless times over the next few years. They never found a thing. Regan had a decent 1969 for the Cubs, but tired toward the end of the season, blowing leads in several key games. He pitched for the Cubs a few more years, but by 1972, he was done.
(Photo: Topps 1970 Baseball Card)

~Rudy Schwenck 1884–1941 (Cubs 1909)
Schwenck was a lefty from Kentucky who got a brief taste of the big leagues during the 1909 season. He came to Chicago at the very end of the season when the Cubs were already out of it. It was the first year since 1905 they weren’t playing in the World Series. Schwenck bounced around in the minors for a few years after that, before coming back home to Kentucky.

~Thomas Diamond 1983– (Cubs 2010)
Diamond was a first round pick of the Texas Rangers in 2004, but he was a 27-year-old journeyman by the time he came to Chicago. The Cubs gave him his only shot at the big leagues. Diamond wasn’t quite up to the task. He started a few games and came out of the bullpen a few times, but he didn’t succeed in either role (6.83 ERA). When he also got lit up in Triple A the following season, the Cubs cut him loose. 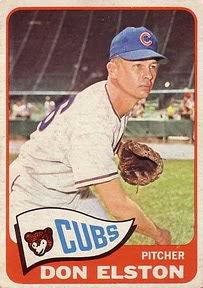 ~Don Elston 1929–1995 (Cubs 1953, 1957-1964)
Elston’s career really took off when he was converted into a reliever in 1958. In his first two seasons in the pen he led the league in appearances. In 1959 he was recognized for his stellar relieving by being named to the All-Star team. He got the save in the National League’s 5-4 victory. After pitching more than just about any other pitcher in the league for five solid years, however, Elston began to run out of gas in 1964. His ERA rose above five for the season. During spring training of 1965, the Cubs and Elston finally parted ways. (Photo: Topps 1965 Baseball Card)