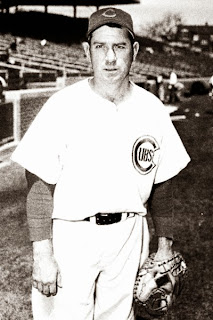 ~Mickey Owen 1916–2005 (Cubs 1949-1951)
Mickey led a fascinating life in and out of baseball. He was a four-time All-Star with the Brooklyn Dodgers during early 40s, and though he set a fielding record as a catcher in 1941, he is best remembered for a fielding error he made in Game 4 of the World Series that season. He couldn’t handle a pitch that would have been the last out of the game (and tied up the series), but the runner reached first base on Mickey’s error. That led to a four run rally and a Dodgers loss. Owen didn’t serve in the military during the war, he was called up AFTER the war, and missed the 1946 season. When he came back, he was one of the players who bolted to the Mexican league. This angered Commissioner Happy Chandler so much, he wanted to ban those players from the major leagues for life. Chandler eventually cooled off, and Owen was allowed to return in 1949. That’s when he joined the Cubs. Mickey was the starting catcher for a few incredibly bad Cubs teams. After his playing days were over, he became a scout, then formed a baseball academy. Among the graduates of that academy…Michael Jordan, Joe Girardi & Charlie Sheen. Mickey later ran for public office, and served as the sheriff of Greene County in Missouri for three terms.

~Willie Ramsdell 1916–1969 (Cubs 1952)
He was known as “Willie the Knuck” because he threw a knuckleball. In fact, it was his only pitch. Everyone knew he would be throwing it, but he threw it well enough to pitch in the big leagues until he was 36 years old. The Cubs were his last team (after stints with the Dodgers and Reds), and they used him out of the bullpen. Willie the Knuck was released in mid-season and finished his career pitching in the minors in California.

~Joe Brown 1859–1888 (White Stockings 1884)
Brown came to Chicago during a rare Cubs down season in the 1880s. The team was already out of it when he arrived in August of that year, but the Cubs (then known as the White Stockings) got their money’s worth out of him. He pitched (going 4-2), played first base, outfield and catcher. The team still played at Lakefront Park that year, located at the corner of Michigan Avenue and Randolph Street. That was the last year they played there. The following season the Cubs went to West Side Park, and Joe Brown went to Baltimore.

~Pete Kilduff 1893–1930 (Cubs 1917-1919)
Pete was an infielder (mainly second base) for the Cubs during the first few years at their new ballpark (Wrigley Field). He was on the pennant winning team of 1918, but didn’t appear in the World Series against the Red Sox. A few years later he got his only taste of the World Series as a part of the Brooklyn Robins. His claim to fame is being one of the three outs of an unassisted triple play. Pete was hired to be the manager of the minor league San Francisco Seals in 1930, but fate intervened. He died of an appendicitis attack before the season started. He was only 36 years old.

~Eddie Watt 1941– (Cubs 1975)
Watt had a stellar career as a reliever in the late 60s and early 70s mostly with the Baltimore Orioles. He was a key member of the bullpen for three pennant winners, and pitched in three World Series for the Orioles. The Cubs picked him off the waiver wire in 1975 and Eddie didn’t have much left in the tank. In six games he registered an ERA of 16.50.