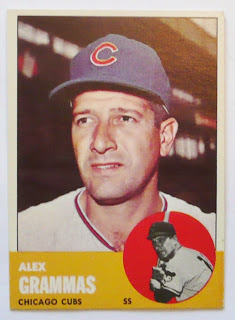 ~Alex Grammas 1926–2019 (Cubs 1962-1963)
Grammas was a big league infielder for ten years, the last year and half of which were with the Cubs. He came to the Cubs (along with Don Landrum) from the Cardinals in the midst of the College of Coaches fiasco. The veteran glove man backed up young Cubs studs Ken Hubbs, Andre Rodgers, and Ron Santo. After his playing career he became a big league manager for the Pirates and Brewers. (PHOTO: Topps 1963 Baseball Card)

~Bobby Hill 1978– (Cubs 2002-2003)
Hill was supposed to be the Cubs second baseman of the future. Cubs brass considered him to be their top prospect. He got significant playing time during the 2002 season, and showed enough promise to convince the Pittsburgh Pirates to trade their young third baseman Aramis Ramirez to the Cubs. That turned out to be a great trade for Chicago. Hill only played part of one season for the Pirates before disappearing into their minor league system. Ramirez anchored the hot corner for the Cubs for the better part of a decade.

~Koji Uehara 1975– (Cubs 2017)
The 42-year-old reliever was far from his prime when he joined the Cubs after a successful stint with the World Series champion Boston Red Sox. Nevertheless, he managed to appear in more than 40 games, posted a sub four ERA (3.98), and even saved 2 games for the Cubs.