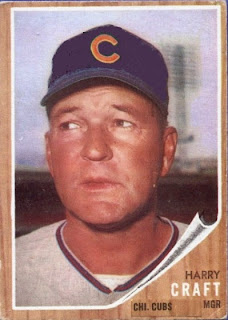 ~Harry Craft 1915–1995 (Cubs Manager/College of Coaches 1961)
Harry was a centerfielder nicknamed “Wildfire” for the Reds during his playing days (late 1930s-early 1940s) before going into coaching. He was Mickey Mantle’s first coach in the minor leagues. He became a big league coach with Lou Boudreau on the Kansas City A’s, and eventually replaced Lou as the manager when he was fired. Lou is also responsible for bringing Harry to the Cubs when he was their manager in 1960. But in 1961, Cubs owner P.K. Wrigley decided to go with the strange coach-by-committee approach known as the College of Coaches. Harry was asked to stay on as one of those coaches. Each of them got a chance to manage the team for a few weeks. Harry got two different stints that season. The Cubs went a combined 7-9 in games managed by Harry Craft. When the expansion Houston Colt 45s asked him to manage their team in 1962, Harry jumped at the chance. In their inaugural season under Harry’s direction, the Colt 45s finished ahead of the Cubs.