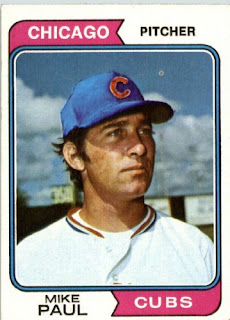 ~Mike Paul 1945– (Cubs 1973-1974)
The Cubs acquired Paul from the Texas Rangers for Larry Gura during the 1973 season. He pitched pretty well out of the bullpen at the end of the 1973 season, but the Cubs released him in April of the following season. Larry Gura, on the other hand, went on to become a two-time 18-game winner in the American League. Paul pitched in the Mexican League until 1982.

~George Borchers 1869–1938 (White Stockings 1888)
George was a pitcher for the Cubs (then known as the White Stockings) for one season (1888), and went 4-4 in ten starts for the second place finishers. His teammates called him Chief which would leave you to believe he had some American Indian blood in him. However, he’s not listed on the Baseball Almanac list of Native American players.

~Danny Friend 1873–1942 (Colts/Orphans 1895-1898)
Friend was a left-handed pitcher in the 1890s as the team transitioned from a veteran-dominated All-Star club into a younger team (hence the nicknames Colts and Orphans). At the age of 24, Danny won 18 games for Chicago in 1896. He was the opening day starter for the team that year, one of their youngest opening day starters ever. He led the league in one category that season–he hit 39(!) batters.

~Mal Moss 1905–1983 (Cubs 1930)
Mal couldn’t have picked a worse year to pitch in the big leagues. Many people thought the ball was juiced that season–several hitting records were set that year including Hack Wilson’s 56 homers and 191 RBI. The college boy (from University of Chicago) didn’t have much of a chance. He registered an ERA of 6.27 in twelve appearances out of the bullpen. Mal’s final outing for the Cubs was a disaster. He faced seven batters, and retired only two of them. He gave up four walks and a hit, and every batter he allowed on base scored. The Cubs lost 15-5 to the Brooklyn Dodgers in front of a sold out crowd. (Hack Wilson hit his 40th homer of the season that game).

~Rich Bordi 1959– (Cubs 1983-1984)
Bordi was an important part of the bullpen during the division winning season of 1984. He started, pitched middle relief, was a setup man, and even closed a few times. The 6’7″ Bordi was traded after the season to the New York Yankees and pitched in the big leagues for another four seasons.

~Dennis Rasmussen 1959–(Cubs 1992)
The 6’7″ lefty pitched for five teams in his 12-year big league career, including one month with the Cubs in the middle of the 1992 season. The Cubs picked up Dennis after the Orioles waived him, and gave him a few appearances to see if he could work out his problems. He couldn’t. His final Cubs ERA was over 10. Of course, lefthanders aren’t that easy to come by, so after the Cubs cut him, the Royals gave him a shot too. He had a 1.43 ERA the rest of that season and pitched two more seasons for KC.

~Alberto Gonzalez 1983– (Cubs 2013)
Alberto began the 2013 season with the Cubs as a backup infielder, but was traded to the Yankees in May. He’s currently in the San Diego Padres organization.