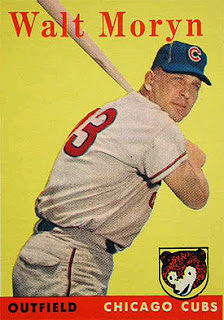 ~Moose Moryn 1926–1996 (Cubs 1956-1960)
His real name was Walter. He was a big boy, 6’2, 205 pounds, which undoubtedly led to his nickname. Moose had a few good power years, knocking in 88 runs in 1957 and hitting 26 home runs in 1958. In ’58 he had three homers in one game (5/30/58) against the Dodgers. Moryn was never exactly an acrobat in the field, but his outstanding shoestring catch with two outs in the ninth saved Don Cardwell’s no-hitter against the Cardinals in 1960. That was probably the highlight of his Cubs career. While Moose was a fan favorite, his teammate Jim Brosnan claimed Moose was never very happy with the Cubs. In the book Wrigleyville, Brosnan is quoted saying Moryn was constantly complaining that he was traded away from the Dodgers, because he always wanted to play on a pennant winner. Needless to say, he never did with the Cubs. (Photo: 1958 Topps Baseball Card)

~Trader Horne 1899–1983 (Cubs 1929)
His real name was Berlyn Dale Horne and he was a right-handed reliever for the 1929 pennant winning Cubs. The nickname came from real-life trader and adventurer Alfred Aloysius “Trader” Horn, who was famous at the time for his safaris in Africa. Trader Horne the pitcher was a 30-year-old rookie finally living his dream on that great 1929 Cubs team. Cubs owner William Wrigley had a soft spot for this 10-year minor league veteran. Unfortunately for Horn, he simply couldn’t find home plate. He gave up 21 walks and 24 hits in 23 innings. By the time the Cubs made it to the World Series against the A’s that year, Trader had pitched in his final major league game.

~Brad Brach 1986– (Cubs 2019)
When the Cubs signed Brach before the 2019 season, it seemed like a good low-risk gamble. Brach was coming off seven consecutive effective seasons as a reliever (for San Diego and Baltimore). But like so many other formerly effective relievers, something happened to Brach in Chicago. He lost his command. In 39.2 innings, he walked 28 men. His ERA suffered (6.14), his WHIP was obscene (1.76), and when the Cubs needed to make a roster move in early August, they looked around the clubhouse and realized Brad was the one who needed to go. He finished the season with the Mets, and somehow regained his effectiveness.

~Charlie Pick 1888–1954 (Cubs 1918-1919)
Charlie was the starting second baseman in the 1918 World Series for the Cubs. During the regular season he had split time at 2B with Rollie Zeider, but he played every game against the Boston Red Sox during the World Series. He batted sixth, and hit .389 for the series, including an impressive 2 for 2 against Babe Ruth in Game 4. The Cubs traded him the following season (along with Les Mann) to the Boston Braves for Buck Herzog.

~Woody Fryman 1940–2011 (Cubs 1978)
Fryman was already in his 12th season in the big leagues (and had been a two-time All-Star) when he arrived in Chicago. The Cubs acquired him for starting pitcher Bill Bonham. Woody got off to a slow start with the Cubs, and by June they figured he was washed up at age 38. They traded him to the Montreal Expos, and wouldn’t you know it, Fryman pitched another six seasons. In his career, Woody played 18 seasons, won 141 games, and fielded his position about as well as it could be fielded. He had three seasons with no errors at all, and his lifetime fielding percentage of .988 is the sixth best in history. After his playing career, Woody retired to his native Kentucky and passed away in 2011.

~Justin Ruggiano 1982– (Cubs 2014)
The idea was to platoon Ruggiano, because he hit lefthanders much better than righties, but the Cubs didn’t face many lefties. He only appeared in 81 games and hit six homers. The Cubs traded him to the Mariners after the season.

~Scott Turow 1949– (Cubs Fan 1949-Present)
He has written eight best selling novels including “Presumed Innocent,” and he’s still a practicing attorney in Chicago, but Scott Turow is also among the afflicted. He’s a Cubs fan. In the book “The Cubs: The Complete Story of Chicago Cubs Baseball” (written by Glen Stout and Richard A. Johnson), he contributed an essay. The final few sentences sums up what it is to a be Cubs fan as well as anyone ever has…

“There remains a special meaning in being a Cubs fan. It makes sports more profound. It teaches the hardest lesson of all: there is no life that is better than life. Hope dignifies our experience on the planet. But there will be defeat for all of us in the mortuary. With the Cubs, as a writer-friend once said of Hollywood, ‘You learn to take the bitter with the bad.’ You accept hope as an essential irrational part of the human condition that will never be fully borne out. It’s existential. It’s tragic. It’s the Cubs.”