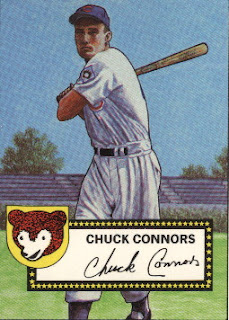 ~Chuck Connors 1921–1992 (Cubs 1951)
The physically imposing 6’5″ Connors played first base for the Cubs in 1951 and hit a whopping two home runs in 200 at bats, not exactly the kind of power you want from a big first baseman. That performance earned him a trip back to the minors. Luckily for him, the Cubs minor league team at the time was in Los Angeles. While he was playing in the Cubs minor league system he got a bit part in the movie Pat & Mike (starring Spencer Tracy–1952). That led him to quit baseball for good and become a full-time actor. By 1958, he was starring in The Rifleman, which aired until 1963. He also starred in Old Yeller, Soylent Green, and Roots, and is arguably the greatest Cubs actor of all-time (other than Sammy Sosa during his “corked bat” press conference).

.~Tom Lundstedt 1949 (Cubs 1973-1974)
The local boy (Prospect High School in Mt. Prospect) was a first round pick of the Cubs in 1970 after a stellar career at the University of Michigan. His high school classmate was Dave Kingman (who went in the same 1970 draft), and his college roommate was Rudy Tomjanovich. He made it to the big leagues in September of 1973 and got to play alongside some of players he grew up watching like Billy Williams and Ron Santo. Lundstedt got a little more playing time as the backup catcher in 1974, and the Cubs traded him after the season to the Minnesota Twins. After his baseball career he moved to Wisconsin and became a motivational speaker.

~George Keerl 1847–1923 (White Stockings 1875)
George was a second baseman for the White Stockings, but didn’t get a lot of playing time. He only appeared in six games, and came up to bat 23 times. He managed only three singles. 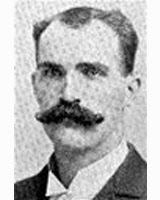 ~Tom Parrott 1868–1932 (Colts 1893)
Tacky Tom, as he was known, got his big league start in Chicago pitching for the Cubs (then known as the Colts). His brother Jiggs was on the team already, so it seemed like a natural choice, but the Cincinnati Reds claimed they had the rights to him. He didn’t fare too well in Chicago (0-3, with a 6.67 ERA) before being ruled to be Cincy property. Parrot then went to the Reds and performed much better, winning ten games for them that year. They called him Tacky Tom because he was a flake and a free spirit, often doing and saying outrageous things. In his spare time, he also played the cornet. He scheduled his gigs around the team’s road trips. He also, it must be noted, sported a world class mustache.