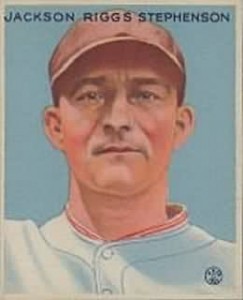 ~Riggs Stephenson 1898 (Cubs 1926-1934)
Stephenson was a former All-American football player, and his nickname Old Hoss fit his build. Old Hoss was a great hitter, one of the best in Cubs history. He still holds the Cubs record for hitters with more than 2000 ABs, with a .336 lifetime average. In the Cubs’ 1929 pennant-winning year, he combined with Hall of Famers Hack Wilson and Kiki Cuyler to form the only outfield in National League history with 100 RBI players at each spot. (Stephenson 110, Wilson 159, Cuyler 102). He had his problems in the outfield, however. Old Hoss threw like an Old Hoss thanks to an old football injury. He had major arm problems which hampered him, and eventually shortened his career. (Photo: 1933 Goudy Baseball Card)

~Bob Caruthers 1864 (1893 Colts)
The very fashionable “Parisian Bob” was a great pitcher (two-time 40-game winner), but unfortunately that was for other teams. When he came to Chicago he only played a handful of games in the outfield.

~Bad Bill Dahlen 1870 (1891-1898 Colts/Orphans)
Bill Dahlen played shortstop and third base for most of the 1890s. They called him “Bad Bill” because he had a violent temper and was a ferocious competitor. He is considered by some baseball experts to be one of the greatest players still excluded from the Hall of Fame. He certainly has the credentials. He once had a 42-game hitting streak, he hit over .350 twice, he had the record for games played when he retired, and still holds the record for total chances as an infielder. He was a great hitter, a great fielder, and he had a great nickname.

~Zaza Harvey 1879 (1900 Orphans)
He only got three at-bats for Chicago, but later got a little more playing time in Cleveland.

~Daryl Robertson 1936 (Cubs 1962)
Daryl got a very brief trial with the Cubs in 1962 during the College of Coaches era. He came to the Cubs in the Moe Drabowsky trade, and got into nine games in May of 1962. In 19 at bats, he managed only two hits. That was his only shot at the big leagues. The Cubs traded him to the Cardinals in June, and they kept him in the minor leagues. Daryl may not have had a long big league career, but he did play alongside three Hall of Famers: Ernie Banks, Ron Santo, and Billy Williams.

~Bob Dernier 1957 (Cubs 1984-1988)
He was the lead-off man for the 1984 Cubs; the first Cubs team to make the playoffs in 39 years. He and #2 hitter Ryne Sandberg were dubbed the Daily Double by Cubs announcer Harry Caray. Both Dernier and Sandberg got on base a lot, played great defense up the middle (Dernier was the centerfielder), and stole bases (45 in ’88). Unfortunately injuries got the best of Bobby and by the time this baseball card came out, he wasn’t getting on the field enough to contribute as he could.

~Danny Jackson 1962 (Cubs 1991-1992)
He was a very good starting pitcher and two-time all-star…before and after his stint with the Cubs. With the Cubs, not so much.

~Chris Nabholz 1967 (Cubs 1995)
Like many players, he finished his career with the Cubs. He had a few good seasons with the Expos before he came to town.

~Ruben Quevedo 1979 (Cubs 2000)
He was supposed to be the hot pitching prospect the Cubs got in the Terry Mulholland & Jose Hernandez trade with the Braves. He went 3-10 with 7.70 ERA.