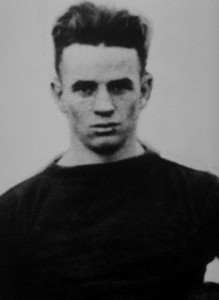 ~Paddy Driscoll 1895 (Cubs 1917)
Paddy Driscoll is a football hall of famer, but he also got a cup of coffee in Major League Baseball thanks to the Cubs. In 1917, the team’s second season at what is now known as Wrigley, he played in 13 games and got 32 at bats. Unfortunately, he only managed three hits. Among the games he played in was the famous double no-hitter on May 2, 1917, featuring Hippo Vaughn and Fred Toney.

~Llyod McClendon 1959 (Cubs 1989-1990)
Lloyd McClendon came up as a catcher, but he didn’t play there much for the Cubs (only 5 games). During the 1989 season he platooned with Dwight Smith in left field, playing mostly against left-handed pitchers. He even started one game of the 1989 NLCS against the Giants, going 2 for 3. McClendon was traded to the Pirates at the end of the 1990 season.

~Don Pall 1962 (Cubs 1994)
He grew up a Sox fan and pitched for them too, but he also pitched across town for the Cubs. His teammates called him “The Pope”.

~Rey Ordonez 1971 (Cubs 2004)
He was a slick fielding shortstop who never did quite master the trick of hitting big league pitching. The Cubs were the last team to give him a chance and he hit .164.