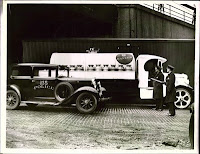 September 3, 1936.
A police officer may have cost the Cubs a victory. Henry Hanson was an ordinary Chicago cop. He was working security at a Cubs-Dodgers game. In the first inning of the game, young Cubs first baseman Phil Cavarretta hit a ball down the right field line, right were Hanson was standing guard. Hanson didn’t see the play clearly, but figured that because he was standing in foul territory, it must have been a foul ball. He picked it up and tossed it over to Dodgers right fielder Randy Moore who was charging toward the play. The umpires saw this little exchange and called timeout. After a long deliberation, they sent Cavarretta back to first base. If Hanson hadn’t touched it, Cavarretta certainly would have had a double or a triple on the play. Because the Cubs didn’t score the rest of the game, and they lost it 1-0 in the tenth inning, the Chicago newspapers blamed the loss on poor Henry Hanson…the Steve Bartman of 1936.

September 3: In 1932, the Cubs win their 15th game in a row, beating the Cardinals 4-1 in the first game of a double-header. Guy Bush wins his 17th game of the season by pitching an 11-inning complete game. The streak ends in Game 2, but they still have a seven game lead over the Pirates…In 1986, Greg Maddux makes his big league debut at the age of 21.

September 4: In 1916, two long-time competitors face each other for the very last time. Christy Matthewson is pitching for the Reds and Mordecai Brown for the Cubs. It’s not exactly a pitching gem. The two teams combine for 34 hits, and the Reds win the game 10 to 8…In 1957, Moe Drabowsky goes into the seventh before giving up a hit, and ends up winning a 2-hit shutout against the Reds. Ernie Banks provides the margin of victory with a 5th inning home run…In 1965, Ken Holtzman makes his Cubs debut. He comes in pitch the ninth inning, and the first batter he faces (Jim Ray Hart) hits a homer. Cubs lose 7 to 3.

September 5: In 1966, Glenn Beckert knocks in two runs in the bottom of the ninth to beat the Phillies 5-4. The hit comes off future Cub Darold Knowles…In 2006, Jimmy Buffett performs at Wrigley—the first concert in the history of the ballpark.

September 6: In 1958, Cubs pitcher John Briggs throws a 2-hitter, but gives up three runs thanks to seven walks. The Cubs hang on to win the game 6-3…In 1992, Cubs pitcher Mike Harkey essentially ends his career when he injures his knees doing cartwheels in the outfield before the game.

September 7: In 1964, Ellis Burton homers from both sides of the plate, but the Cubs still lose to the Milwaukee Braves 10-9…In 2012, Wrigley Field is turned over to Bruce Springsteen, who wows the crowd with an incredible concert held in a torrential downpour.

September 8: In 1968, Billy Williams goes 4 for 5 with two homers and a double to lead the Cubs to a 10-3 victory over the Phillies…In 1973, Ron Santo homers to lead the Cubs over the Cardinals…In 1985, Pete Rose ties Ty Cobb on the all-time hits record with a single against Cubs pitcher Reggie Patterson…In 1986, Rafael Palmeiro makes his big league debut.

September 4, 1935
The Cubs began the longest winning streak in baseball history. The Cubs were in third place in the National League 2 1/2 games behind the first place Cardinals, and a half game behind the second place New York Giants. They had been flirting with first place for most of the season, but nobody on that Cubs roster could have predicted what began on that September day.

The Cubs beat the Phillies at Wrigley Field 8-2 behind the pitching of Larry French (photo) and two homers by Augie Galan, and they wouldn’t lose again until September 28th. It remains the most incredible winning streak in baseball history. They beat all comers in every way imaginable. They swept the Phillies, the Braves, the Dodgers, and the Pirates at home, and then won another three at St. Louis. They won slugfests and they won pitchers duels. 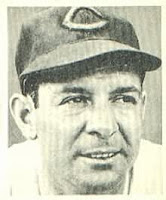 But the hottest hitter of all was their lead-off man Augie Galan (photo). He hit 5 of his 12 home runs that season during the streak, and batted an astounding .358 to finish the season at .314. There were only two games he didn’t reach base.

The city of Chicago got more and more excited as the streak wore on. In that first win, only 5000 were in attendance. By the time the Cubs won their 18th in a row at Wrigley, 40,000+ packed the joint; despite the fact that the country was in the darkest days of the Great Depression.

Probably the best game of the streak was the 19th win in a row. Lon Warneke and Cardinals pitcher Paul Dean both entered the game as 19-game winners, and both men pitched their hearts out. Dean threw a seven hitter, but Warneke allowed only two hits. But the streak wasn’t the only thing at stake during this game. The Cubs were only three games ahead of the Cardinals with five games to play in the season, and all five games would be head-to-head in St. Louis.

Unfortunately for the Cardinals, the difference in the game was one single mistake pitch by Dean, which was smacked over the fence by Cubs first baseman Phil Cavarretta. That gave the Cubs a nearly insurmountable 4 game lead with 4 games left in the season.

The 20th win in a row the next day clinched the pennant, and the 21st win in a row came the same day in the second game of the double header. Whether or not the Cubs celebrated that night a little too ferociously is lost to time, but they did drop the meaningless final two games of the season.